Looking for a great getaway from the usual military grind or just your mundane day-to-day routine? Then head on over to join up with the Pyeongtaek Hiking Club on weekends. The international Club meets every other weekend in the parking lot of the Songtan International Community Center at 9 am (opposite the old Osan AB Morin Gate, now closed to POV traffic and open only to trains), usually on Saturdays. Hikes are relatively easy, essentially free, and open to any adult reasonably physically fit. Children under the age of 18 must be accompanied by an adult. Any furry friends? Fine, just bring a leash. The Club tries to return by 4-6 pm after stopping at a convenience store to freshen up or a restaurant if members decide on a full luncheon. 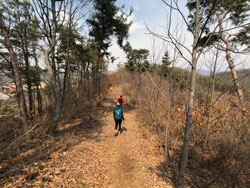 The Club has just begun its fourth year this past March and is looking to expand its hiking base. Hikes are scheduled from mid-March to mid-July, then from early September to mid-December. No vehicle, no problem. Members carpool. Just limit yourself to one other hiker if you don’t have your own transportation. But expect to pay a meager $3 or W3,000 to pitch in for gas if you need to bum a ride with somebody else to the day’s destination. The Club tries to get out into the countryside at least 30 minutes to a one-hour drive away from Osan AB Main Gate to keep hike routes different and exciting. Members try not to repeat the same routes. Unlike USFK recreational tours, secluded, getaway paths are chosen; other hikers aren’t usually seen. It’s a great opportunity to get away from the crowds. 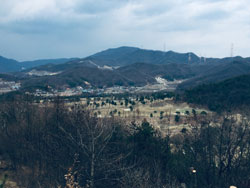 Hikers are mainly Korean and American; however, other nationalities from virtually every continent have joined in on the fun. Just bring a good pair of hiking boots and a durable walking stick. Don’t forget to bring plenty of water along with Korean won for snacks or a luncheon.

Long-time Club member Yeon Shin says, “Hiking makes me healthier both in mind and spirit.” She took charge of her first Club hike to Sa-bong (Mountain) when leading other members on a three-and-a-half hour trek. Afterward everybody headed out to chow down on bibimpap (a Korean mixed rice and vegetable dish with hot red pepper paste) at a nearby eatery before heading home.

LTC William Tudor, a Camp Humphreys soldier who routinely hikes with the Club, led a hike in April of 2019 and says, “Hiking supports the Army’s Performance Triad initiative allowing me to maintain optimal fitness in an enjoyable way. By eating healthy and hiking regularly, I shed over 20 pounds of excess weight in just over 90 days.”

This summer at least two overnight hike, swim, and campout trips are planned for northern Chungcheongbuk-do (Province), weather cooperating, around Memorial Day and later around Labor Day. The Club is also a great avenue for Korean speakers to improve their English language skills and for non-Koreans to learn some Korean themselves. 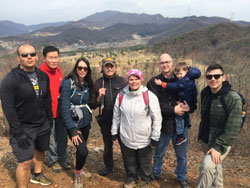 Ron (Roman), Club founder, asks that members and would-be members contact him by Friday 6 pm the day before the hike to indicate if they are hiking or not and if they need transportation. Ordinarily, members are contacted via cell-phone text on Thursday morning before the hike weekend. Members need to respond by cell phone text whether they expect to hike or not. If they repeatedly fail to do so, they will be dropped from the Club roster. Rain or air pollution levels (PM 2.5/75 or higher according to air quality indicator app Air Visual) postpone Saturday hikes to Sunday; any hike scheduled for Sunday encountering the same conditions would be canceled. Hikers are encouraged to wear face masks if pollution levels are borderline. Decision to postpone or cancel hikes is made at 8 am of the same day. Anyone who would like to lead a hike is welcome to do so. Don’t miss out on the next excursion in search of some of Korea’s great panoramic mountain views. Phone him at 010-2690-5593 now.

---Ron Roman has taught English and the Humanities for the University of Maryland University College (UMUC) all over the Indo-Pacific Command originally since 1996. 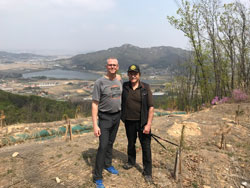