If you can’t make it to the popular Itaewon area in Seoul, the Pyeongtaek International market is an easy alternative for people who live near Osan Air Base. Located right outside Osan’s main gate, and a 10-minute walk from Songtan Station and an hour drive from Camp Humphreys, this area is a popular hangout, even if it’s not as glittery and popular as Itaewon 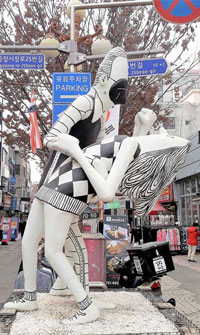 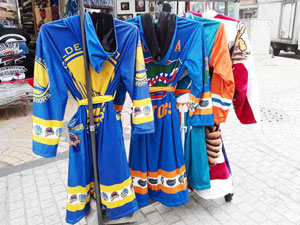 Another iconic food here is Budae-Jjigae, which translates to “Army base stew.” After the Korean War, food was scarce and many Koreans living around U.S. bases in the Uijeongbu, Pyeongtaek, and Munsan areas made use of surplus ham, sausages and baked beans from the  U.S. military. They made a stew out of these ingredients. It’s a recipe that is dished up at many restaurants across Korea, including some in Pyeongtaek market area. 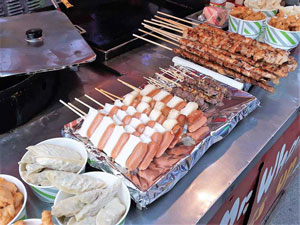 When you come to the end of the main street of the market, you will spot a narrow alley just before a railroad track that was once used to deliver oil to Osan Air Base. This alley is a popular place for dates to take a stroll and take in the murals that are painted on the alley walls and street.  Sometimes photo clubs host exhibitions in the alley. Pretty neat place to visit.

This market was at its height during the economic boom of the 1980s. Although the number of stores and restaurants has decreased since 2000, the merchants still hold many festivals and special events to draw folks to the area. Every summer, they hold the PangPang Festival, where you can taste cocktails made with Makgeolli (a traditional Korean alcoholic drink) and enjoy street performances.

The “HELLO NIGHT MARKET” is one thing that cannot be missed. From 1-9 p.m. every Saturday, a dozen pink-colored souvenir and food carts run by young people are out selling their goods.

“It is clean, comfortable and the prices are reasonable, but I visit here sometimes to just take a walk with my children,” said Mrs. Indiana, a civilian worker from Osan. Newness and familiarity coexist in this market. If you are new to Korea, here’s a great place to stroll, sample food and look for bargains. And if you’ve lived in the area for a while, it’s still a great place to get a bite to eat … and do some Christmas shopping. 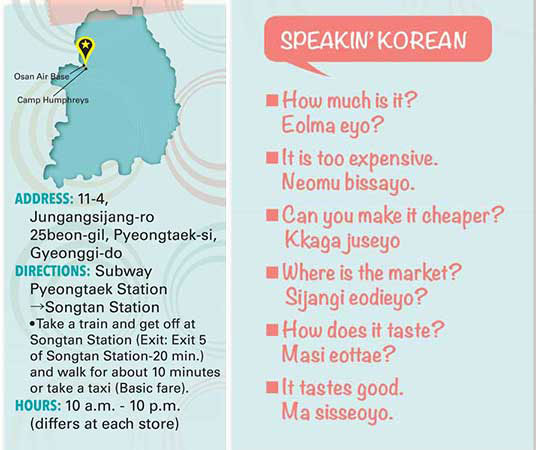