If you want to get away from hustle and bustle of the city life, Gakwonsa Temple and its surrounding area is the perfect place for one day trip. Located at the foot of Mt. Taejosan, a few miles east of downtown Cheonan in Chungcheongnam-do, it is about a 40- to 50-minute drive from Camp Humphreys and Osan Air Base. 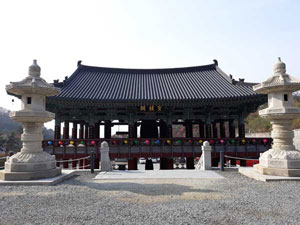 Gakwonsa Temple is a great place to breathe in the fresh air, reflect and enjoy the picturesque scenery and tranquil atmosphere.

When most people think of temples and shrines in Korea, they picture centuries-old structures weathered from the past. That is not the case with Gakwonsa Temple, which was built in 1977 by a monk named Beobin who spent the Korean War praying for peaceful relations between the North and South. Although it is a relatively new building, it does harmonize with its surroundings like other traditional Korean buildings.

What I like about this area is that there is more than just a beautiful temple. There are also walking paths where you can stroll at your own pace and a street in front of the temple full of restaurants and stores. And, there’s a giant Buddha! 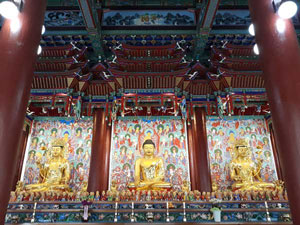 There is ample parking for vehicles in the lot located just before a magnificent bell tower, called a Jonggak. The bell tower is bigger than most in Korea because the massive bell (Beomjong) it supports weighs 20 tons! You can hear the grand sound from it every day at 4:30 a.m. and 6 p.m. It’ll definitely wake you up, whether you are there in the morning or evening. As you walk underneath the tower, you’ll see big antique roof tiles on display. They are quite beautiful. 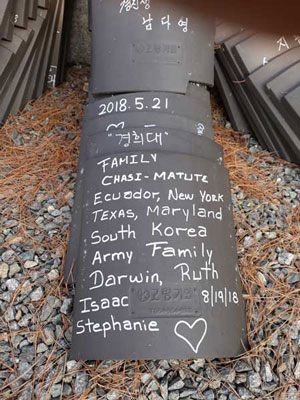 After you pass by the bell tower, you will spot Mahavira Hall (Daeungbojeon) in front of you. Multiple halls for learning Buddhism are located on both sides of the main hall. The inside of Mahavira Hall is gorgeously decorated with paintings and three golden Buddha statues. The golden Buddha triad symbolized Buddha sitting on the Sumeru Mountain and the paintings represent the Buddhism view of the world.

If you have time, stay inside the hall and feel the peace and quiet for as long as you want. When the wind chimes hanging under the eaves awake you from a brief moment of silence, you should make your way outside the hall to take in the largest attraction on the temple grounds. 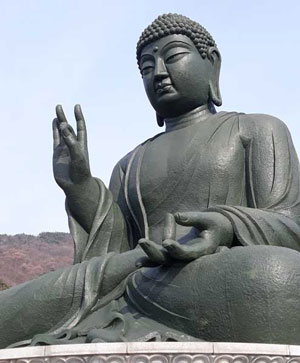 When you step out from the hall, you can see a seated giant Buddha, which was under construction from June 1975 to May 1977. Called Amitabul-sang, it is the biggest Buddha statue in Korea and the second largest in Asia, weighing a massive 60 tons and standing (although it is sitting) 15 meters high. Its ears alone are two meters and its fingernails are 30 centimeters long. Although you might be overwhelmed by this grand statue, don’t forget to take a selfie with it. It offers a nice place to take a picture because it overlooks the temple and beautiful landscape. Note: If you park your car next to the souvenir shop located next to the pond by the temple, not the parking lot, then you can take 203 stairs that lead directly to the Buddha. Some people prefer to start their trip from this spot. 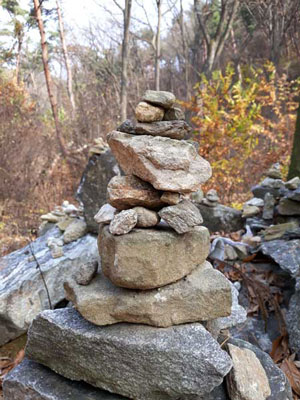 Once you’ve had your fill of the big Buddha, there are a couple of trails that lead up into Taejo Mountain, which stands 420 meters high and was named after King Taejo, the founder of Goryeo. It provides a full view of the city from its summit. Many hikers and mountaineers visit this place, especially those with children because it is a relatively gentle trail.

When you get to the start of the hiking trail, it is divided into two paths. Many people prefer the right one, which is a bit gentler than a steeper left path. Whichever you choose, it takes about one hour to the top of the mountain. Yes, you can get to the top of the mountain, but be sure to wear athletic shoes. If you’re on a date, leave the heals and dress shoes behind. It’s all about being comfortable. By the way, bringing a small picnic to enjoy during your walk is also an enjoyable thing to do. 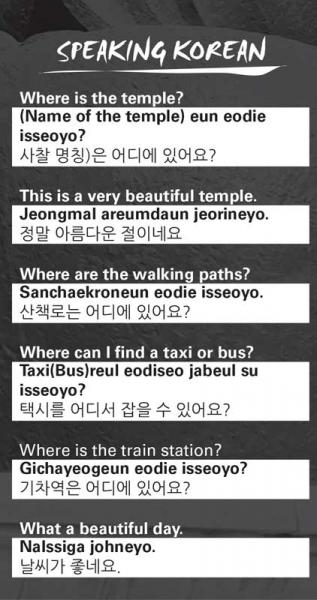 If you don’t bring your lunch, don’t worry. Many traditional Korean restaurants and stores line up along the hill leading to the temple entrance. You can try vegetarian restaurants specializing in wild herd and vegetable dishes, or you can slurp down some tasty, hot noodle soup (Kalguksu) at Goljjagi Sanghoe, a small restaurant located across from the pond.

There are plenty of places to eat, as well as shops where you can pick up some local veggies. It’s a good way to finish off a day trip to Gakwonsa Temple. 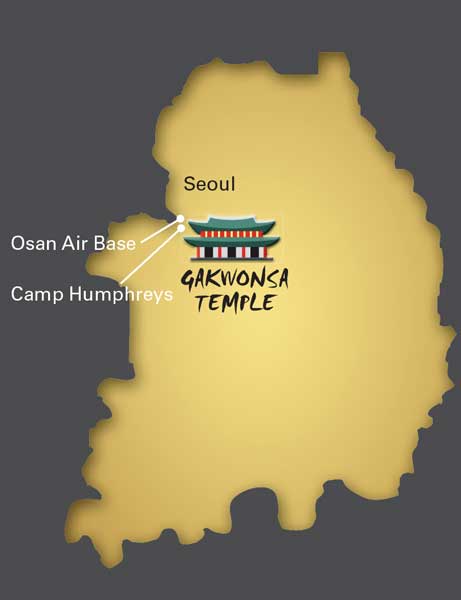 Too scared of jumping out of airplane? Try indoor skydiving in Korea!