Sancheong near Busan promoting a planting project for magnificent views

Sancheong near Busan promoting a planting project for magnificent views

Sancheong-gun in South Gyeongsang Province is continuously promoting a planting project to make the Crepe Myrtle, a representative summer flowering tree, a new attraction in the region.

Along the 67km section of road, including national highways 3 and 20, they have planted more than 10,000 trees including the Crepe Myrtle and barberry.

Sancheong-gun is continuously promoting a planting project to make the Crepe Myrtle, a representative summer flowering tree, a new attraction in the region.

From 2001 to this year, the county planted barberry trees on national roads 3 and 20, along the 67km section of the road, including Donguibogamchon and Hwagye, Geumseo-myeon. 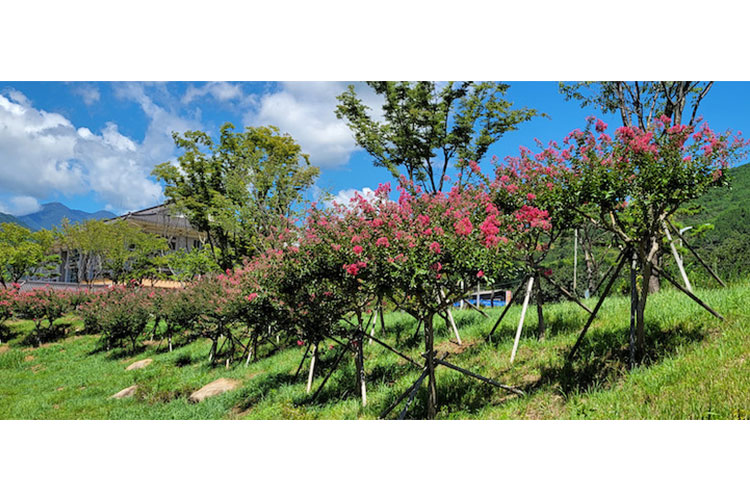 A total of about 10,000 trees have been planted so far, and in the future, they plan to continue planting trees along the riverside Dukbang-gil area in Sinan and Sindeung-myeon.

The trees are in full bloom from the end of July to mid-September, and the period to see the red flowers lasts for more than 100 days, so it is also called the lily-of-the-valley.

The ancient ancestors considered the tree to symbolize the prosperity of descendants and the friendship between brothers. In particular, it was planted in places to commemorate loyalists, martyrs, and scholars because it kept the red light for 100 days to symbolize the innocence and loyalty of scholars.

In Sancheong, a barberry tree in the yard of Deokcheon Seowon, Gyeongnam-do Tangible Cultural Heritage No. 89, in Sicheon-myeon boasts a beautiful appearance every summer.

Deokcheon Seowon was built by his disciples to commemorate the master of practical Neo-Confucianism who wrote ‘Eulmyosa Jikso’. It is one of the Sancheong Sijo Relics and is known as Historic Site No. 305.

“The representative summer flower, the Crepe Myrtle, is a tree that symbolizes Sancheong, the hometown of scholars,” an official from the military said,

He continued, “We will continue to strive to create beautiful green spaces not only along national roads but also in ecological forests and riverside embankments as rest areas for local residents.”

A heavenly view of Korea from a cable car