When exploring South Korea, traveling by train is definitely one of the safest, convenient and most useful ways to get around. However, choosing the right trainline opens up a set of challenges for people unfamiliar with the pros and cons of each option. 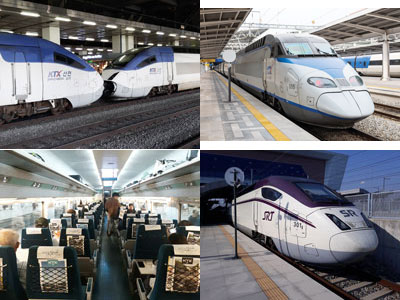 The white and blue KTX is KORAIL’s flagship train and the fleet is split in two: KTX-I and KTX-Sancheon. The KTX-I, first unveiled in 2004, is an 18-car express train with both forward and backward-facing seats. I rode the train in a backward-facing seat and was dizzy, so be weary of that. Or you ride first-class, which offers rotating seats.

KTX-Sancheon, is an updated version of the KTX-I and operates either 8- or 16-car trains. All seats in this train are rotating and provide a little more room between rows. KTX-Sancheon is also quieter than the KTX-I.

In your journey around Korea, you will come across the purple express SRT. This train offers useful power sockets to charge your devices in all seats, but there is no standing room on this train.

The KTX shares its rail route with SRT including Gyeongbu Line and Honam Line. Ride either train if you’re planning to go to Gyeongbu or Honam Provinces. SRT does not operate on the Jeolla Line and Gangneung Line, thus requiring a transfer at Iksan station for Yeosu and at Seoul Station for Gangneung, where you can catch the KTX train that does go to those provinces.

As far as cost is concerned, SRT is up to 15 percent cheaper than KTX, but the SRT lines are still limited to certain areas. A good way to choose a train is to consider your destination and travel time rather than train fare. 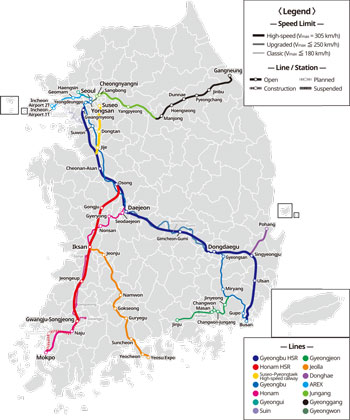 Korea’s train systems may be daunting to some, but they don’t have to be. Pay attention to the color of the trains and figure out which of the two will work best for your next trip around the peninsula.

All Aboard! Haeundae Beach Train set to make its debut Oct. 7