After Ciara spent her mandatory two weeks in Korean quarantine, she was itching to get out of the confines of her small hotel room as soon as possible. So, as soon as 12:00am hit on her 14th day of quarantine, I was outside her hotel (flower in hand–yes ladies, chivalry still exists lol) ready to whisk her down to Osan. Because she got out of quarantine on a Wednesday, we finished out the remainder of the week exploring local attractions such as the various restaurants in the SED an an amazing Indian food spot near Camp Humphreys (Arati).

Luckily, Ciara has a job where she can telework from just about anywhere that has a Wi-Fi connection (I know, dream job right?) so while she spent a total of ~6 weeks in Korea, she only had a to use about a week of her vacation time. However, because her work still had weekly and monthly meetings, she was required to get up around 4:00am on some days to log in for meetings at 1:00pm where her work office is.

However, we still were bound and determined to have an amazing time while she was out here so the first weekend she was out of quarantine, we bought a couple of train tickets bound for Busan!

Food Markets and Haeundae
If you’re planning a trip to Busan anytime soon with your significant other (or friends), I highly recommend staying in Busan’s Haeundae district. You’re literally steps away from an amazing beach, there’s tons of restaurants nearby, and cabs frequent the area often, making getting around a breeze! After checking into our hotel in Haeundae, we started making out way towards the beach but were quickly distracted by the enticing smell of some local, Korean street food. To our surprise, right off the main street running parallel to our hotel was a market full of venders cooking up everything from seafood to steamed dumplings. Being the vegetarians we are, we opted to skip all the vendors slinging seafood and decided to try some steamed kimchi dumplings–they were delicious! Being that we were just yards away from the beach, we decided to take our boxed-up appetizers down to Haeundae Beach, soak in a little vitamin D, and listen to the waves crash into the shoreline.

From there, we continued exploring the area until nightfall when we decided to get a little dressed up and find a place to celebrate Ciara’s long-awaited visit with a nice meal. After making a lap around the main strip to see what was available, we ducked into a small restaurant called Cheong Dam Lee Sang. Not knowing it at the time, we had stumbled into a highly-regarded Japanese Izakaya restaurant…talk about finding a hidden gem! Again, being the vegetarians we are, we didn’t eat any of the sushi but opted to try a few of the different apps they had on the menu. We ordered some potato croquettes, some soju, and a few specialty house drinks while we gazed out the window and people-watched, enjoying life to the fullest!

Veganarang
After a great night’s rest, we woke up pretty hungry so we decided to go across town and try out a vegan restaurant called veganarang. This establishment is an all-vegan restaurant that serves temple-style foods and is located on the 9th floor with impeccable views of the sea. I had been wanting to try this place since my last visit to Busan but simply ran out of time. So, Ciara and I hopped on a couple of Lime scooters and scoot-scooted on over from our hotel.

We didn’t know it at the time, but we were in for an 8-course meal…yes, 8 courses lol. What we also didn’t know was that of the 8 courses, 7 of them were mushroom-based. Needless to say, we were both pretty mushroomed out by the end of it but our bellies were very happy. Slightly in food comas, Ciara and I decided to continue our exploring by checking off another bucket list item of mine–the Haedong Yonggung Temple. I had been looking forward to visiting this temple for quite some time and what better time to experience it than with my awesome travel buddy! We hailed a cab and made our way towards the ‘Temple on the Sea’.

Haedong Yonggung Temple
As we arrived, Ciara probably couldn’t tell but I was full of anticipation to finally view the famous temple on the water I had seen in my countless searches of “what to do in Korea”. We started by passing through the one-temple gate and made out way through a lovely stretch of bamboo trees that led to corridor of 8-foot-tall statues representing the Chinese Zodiac animals. Pausing to do a couple photos in front of the ones Ciara and I were born in, we continued down a rather steep staircase that led directly to the temple. As we edged down towards the water, the temple slowly came into view–I was speechless!

The photos I had been viewing of this majestic place couldn’t do it any justice compared to viewing it in person. The cloudy, overcast skies above created a rather ominous mood while the striking contrast of colors of the temple made for a vibrant energy all around us. Try as I might, even I know that my words can’t do this iconic location justice; you just have to go see it for yourself! 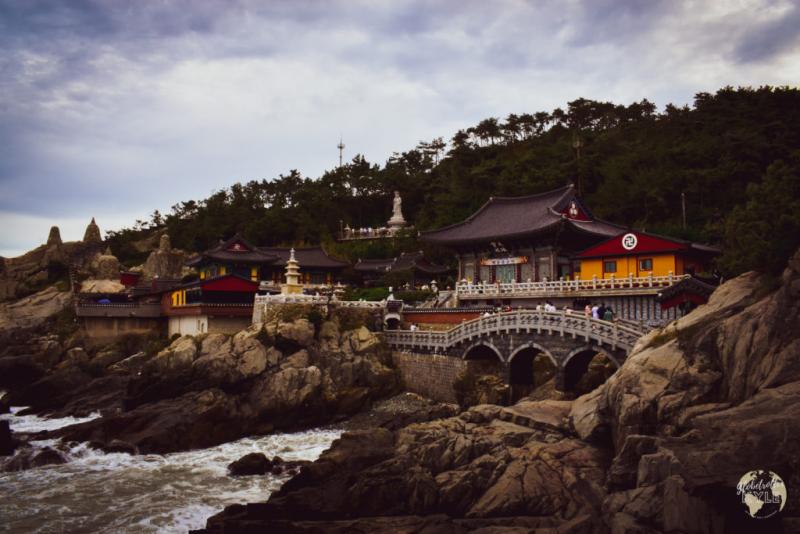 As we departed the temple, we made our way back to the hotel with no clue on how we wanted the night to go. However, we did know that we wanted to have some fun getting a tad dressed up again and stroll along Haeundae, taking in the nightlife. After choking down some pretty terrible Indian food (I don’t want to even mention the restaurant here lol) we needed to cleanse our pallets end the night on a high note. Ciara grabbed my hand as we ducked into an arcade for a few rounds of air hockey and some skeeball.

As Ciara proceeded to kick my butt in air hockey, we overheard some rather terrible singing coming from the other side of the arcade. Being the investigative couple we are, we decided to be a tad nosy and go see where it was coming from. Turns out, we had just discovered the amazing notion of coin karaoke! Not knowing any of the words (or tunes for that matter), Ciara and I chuckled as we continued on about our date night in the arcade to the incredibly high and randomly sung tunes of Korea’s finest singers–the best way to end an epic first night!

Busan Street Markets
Another good night’s rest and we awoke with more exploring to do! We had our coffee and we set out the door towards the street market district of Busan. First stop: grab some breakfast. Ciara and I followed our noses which led us to the BEST (and I mean the best) French bakery in Busan. As we entered, the sweet smell of buttery pastries filled the air and it transported us halfway around the world to Paris in an instant! Croissants, pain du chocolates, eclairs, macaroons, madeleines; this bakery had them all!

I had the croissant (I’m a classic guy) while Ciara had the pain du chocolate (she’s the elegant gal). As classy and as elegant as we are, we looked like starved children as we inhaled the buttery, flaky, amazingness. With our stomachs satiated for a while, we wandered up and down the Gukje Market until our feet began begging for a break. Feeling the fatigue, we stopped at an amazing little café called rendaja-vous. We sat in a comfy love seat overlooking Arirang Street while sipping mochas and people-watching–quite the awesome little break if you ask me! 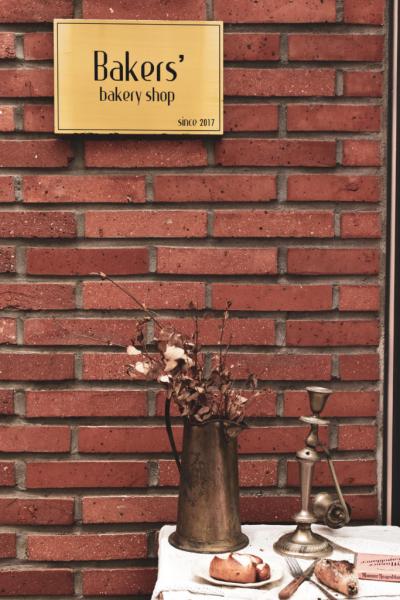 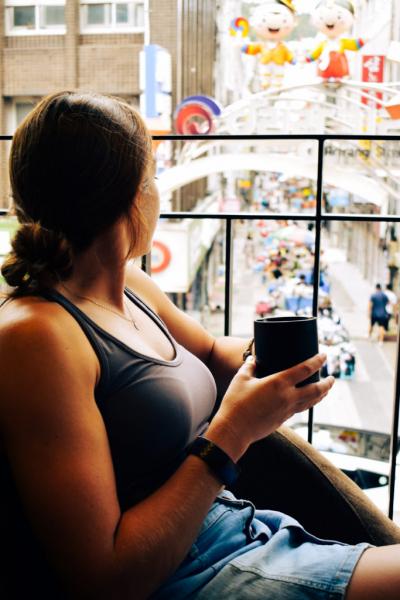 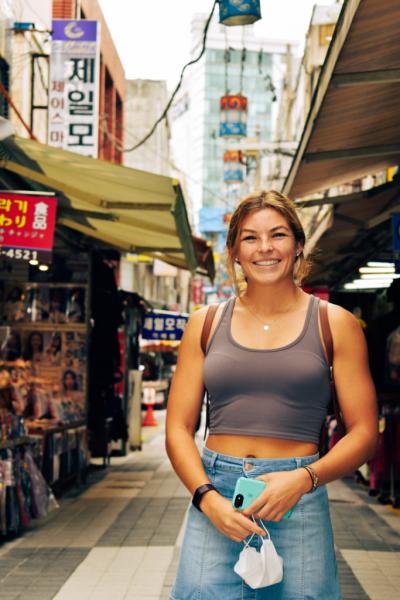 Gamcheon Culture Village
Soon after we had had our fill of market exploring, we wanted a change of scenery and to be somewhere that didn’t smell like fish lol. We had both heard of this awesome little village nearby that had amazingly colorful houses called the Gamcheon Culture Village. We hailed a cab and began making our way to the other side of Busan.

As we arrived, the sun was still high enough in the sky that it felt as though we had about an hour’s worth of daylight left. We passed a few small shops, popping in to each one to view their merchandise before finally ordering some lemon ginger tea in another small café. If you haven’t already gathered, South Korea is FULL of small cafes, each offering a different theme over the others. This one though, will forever remain engraved in my memory simply because of the company and the experience.

As we placed our order, I peered past the ordering counter and noticed a small set of stairs leading upwards. I asked the barista if those led to the roof and if we would be allowed to sit up there and enjoy our tea. The man happily said yes, gave me a bow, and returned to making our drinks. Ciara and I walked up the small staircase and our breath was instantly taken away. It wasn’t the stairs that left us breathless but rather the beautiful view we just so happened to stumbled upon. Feeling spontaneous, Ciara and I decided to do a photoshoot right then and there. Arguably, I’d say that what I captured on that rooftop was some of the most beautiful photo’s I’ve taken since owning my camera. 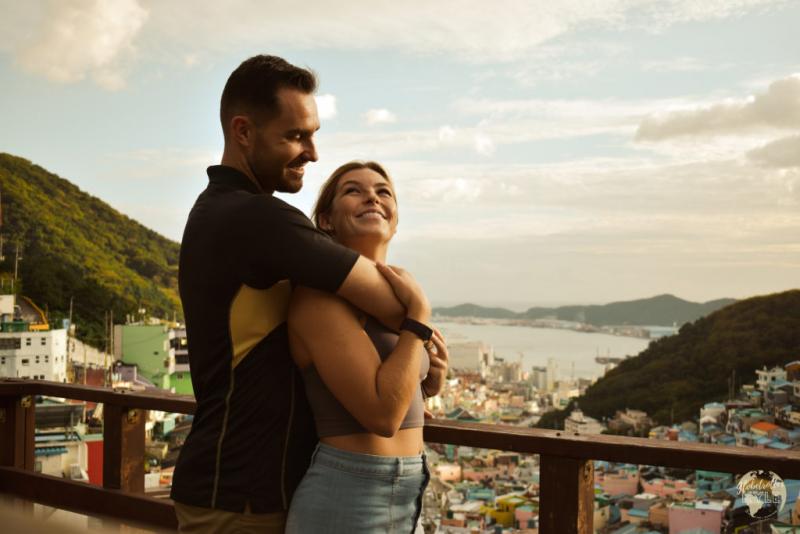 Strolling Along Haeundae Beach
As we made our way back to the hotel, we made the decision that we’d get dressed up one last time and have some dinner. We started the night by redeeming the previous night’s horrendous Indian food with some good Indian food on the Haeundae strip. Neither of us had ever really enjoyed Indian food before trying it as much as we did while Ciara was out here but we’ve both fallen in love with the dishes since!

After finishing our healthy servings of curry and naan, we began making our way back to the hotel. Hand-in-hand, Ciara and I strolled the streets one final time as we gazed into the random restaurants and bars teeming with happy people out on the town. Unexpectantly, we noticed a rather decorative bookcase in the back of a 1st-story building currently under construction as we passed by it.

Being the curious explorers we are, we sidestepped the scaffolding and power tools and entered the construction zone to examine the anomalous bookcase. As we got closer, I noticed a red phone on the wall that simply had a number written above it. So, I dialed the number and all of the sudden, the bookcase opened up…we had discovered a restaurant that operated like a Korean speakeasy!! To our surprise, this restaurant doubled as a cigar lounge and bar serving pizzas and appetizers. Ciara and I ordered an odd appetizer that literally turned out to be jelly beans and pretzels (not even kidding lol) and a few drinks. Because it was Sunday night, we had the entire place to ourselves–it was the coolest thing!

One final night in the hotel and our final day had unfortunately arrived. Our time in Busan was much too short but amazing, nonetheless. Speaking for myself, the best part of the trip was having my adventure buddy alongside me, ready and willing to explore anything and everything we could find. We finished our final day off by taking a romantic cable ride over the bay and strolling along Haeundae Beach–the perfect ending to a perfect weekend! 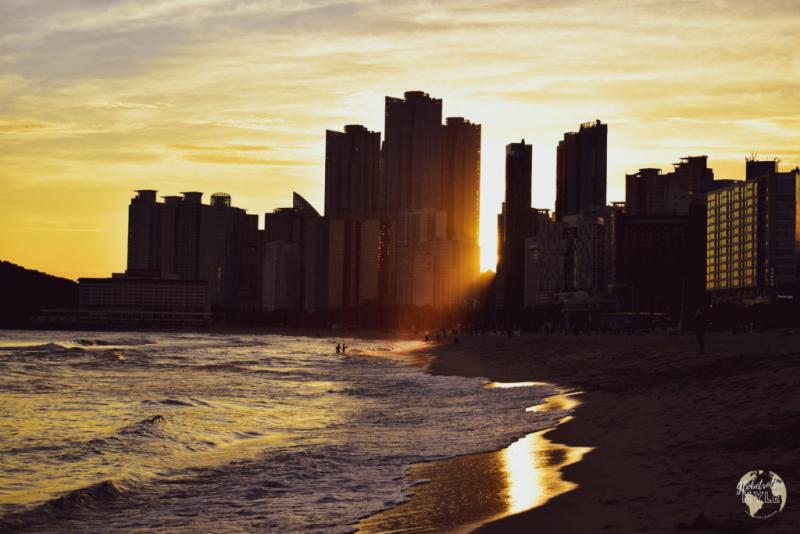