Officially Korea’s first beach which opened in 1913, Songdo has re-emerged as a must-stop on local tours.

Songdo, which translates into Pine Island, was given its name due to the lush pine trees adorning the outskirts of the beach.

Located just three kilometers from Nampo-dong, Songdo offers a romantic backdrop for couples looking for some peace and quiet, away from the hustle and bustle of the city.

While it became mostly deserted since the 1960s and 1970s, recent projects in the past seven years to bring it back to its former glory have been successful in bringing back tourists looking for something new.

Chosen as part of 2019-2020 “100 Must-Visit Tourist Spots of Korea”, Songdo offers great history and is not without its charms.

While statistics over the past three years have shown it has become one of the rising tourist destinations in the city, it also has recently seen a bump in overnight visitors with the opening of a Best Western Plus and the Fairfield by Marriott Songdo along the beach road.

Take a look at some great places to visit around Songdo.

Completed in 2018, the Songdo Sky Bridge invested 3.8 billion won of federal and city expenses into the project. The sky bridge is 120 meters in length, two to four meters wide. It was restored after 15 years of being dormant and is one of the larger draws offering fantastic views of the sea.

The Songdo Marine Cable Car was restored in 2017 after nearly 30 years and a 665 billion won restoration project by Daewon Plus Group, also the builders of the Doosan We’ve Zenith Towers in Marine City.

The cable car runs for 1.62 kilometers from the east of Songdo Beach to Amman Park. It has 39 cars with 10 seats each with a clear bottom in each cabin.

The cable car runs 86 meters above the sea and offers great views of Amman Park, Namhang, and the Yeongdo coastline. It is also equipped to withstand a 7.0 earthquake as well as strong winds and tsunamis. 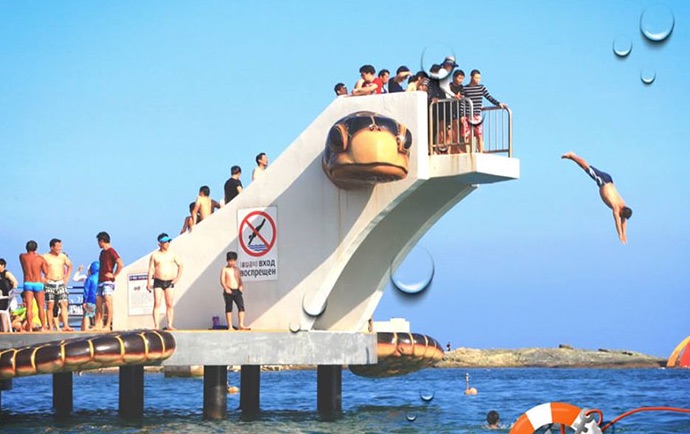 The sea diving boards, which attracted attention in 1927 during the Japanese colonial period as Korea’s first and only such installation, were restored to celebrate the 100th anniversary of Songdo Beach in 2013.

Two sea diving boards with a shape in honor of nearby Turtle Island were installed about 70 meters off the beach.

Recently opened, the 127.1-meter long and 2-meter wide bridge now connects Amnam Park to Dongseom Island, where visitors can walk on the bridge and enjoy a magnificent sea view along with sedimentary rock layers from millions of years ago and rock formations and cliffs surrounding the observatory at Dongseom Island.

A heavenly view of Korea from a cable car