Speakin' Korean: Confucian says it’s all about your age in Korea

Speakin' Korean: Confucian says it’s all about your age in Korea

One of the most culturally shocking moments for me when I was attending college in the U.S was when my 60-year-old professor said, “Just call me James.”

Growing up in Korea, I was influenced by Confucianism, which teaches us to respect our elders and obey them. Confucianism is a system of thought and behavior originating in ancient China, which has greatly impacted East Asian culture for thousands of years.

When I lived in the States, however, my upbringing was put into question when I met others who insisted I call them by their first name and who said we were friends despite their age or social status. It taught me that all human beings can be treated equally regardless of age.

For Koreans, knowing your age is more important than your name. Age can determine a social hierarchy, role and the title to be called. It determines how we behave and talk to others according to their age.

In Korean society, we refer to our elders with honorific titles. This sets up a relationship where the elders are responsible to teach and take care of the young, while the young are expected to show their respect to their elders.

Though addressing our elders this way is a cultural custom, that doesn’t mean it is always the case. There are, for instance, times when generational conflicts between elders and youth happen mostly due to them not understanding each other.

Koreans will not expect you to follow these rules when you are speaking in English. However, when using Korean that contains such cultural sentiments, it is good to know how to use honorifics.

Honorific titles for friends
In Korea, a friend usually means a person at the same Korean age which means they were born in the same year. If a person addresses older friends as “friend” in front of others, it can be considered disrespecting the elders. You have to differentiate how to call, talk and behave toward your friends depending on their age. Let’s learn how to talk and call your Korean friends according to their age!

- The same Korean age: Chingu (친구)
Call each other by first names, but if you call their name including the last name, it sounds cold. When you introduce your friends of the same age to others, you can address them as “Chingu (친구).”

- Younger siblings and friends: Dongsaeng (동생)
Male: Nam (남) Female: Yeo (여)
Call them by names the same way as when you call them “Chingu.” When you introduce them to others, use “Dongsaeng (동생).” If they are your siblings, you’d better use yeo (여) or nam (남) in front of “Dongsaeng (동생)” to distinguish their gender.

Korean age system
Korea has three different age systems. The official legal records follow international standards, but counting age, or Korean age, is most commonly used in daily life. In this age system, you’re two years older than your actual age if your birthday hasn’t passed. Everyone is one year old at birth and gains another year after each year regardless of their birthdays. A baby born on the night of Dec. 31, for instance, will turn two the following day.

For people who struggle to calculate the Korean age, I suggest to just tell your year of birth to your Korean friends. They will be able to figure out how old you are in Korean age. The great news is the Korean government will start using only international standards in June 2023. As Korean, I’m extremely excited to be two years younger soon! 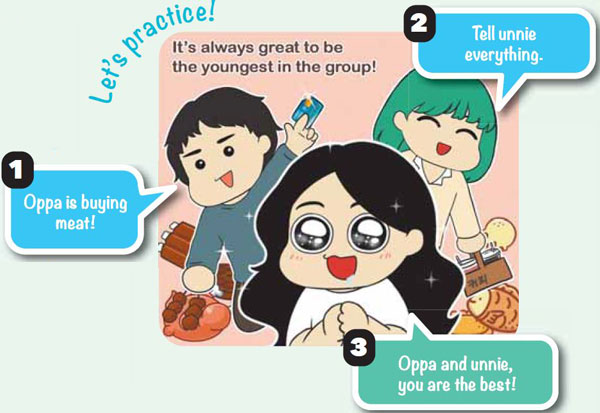 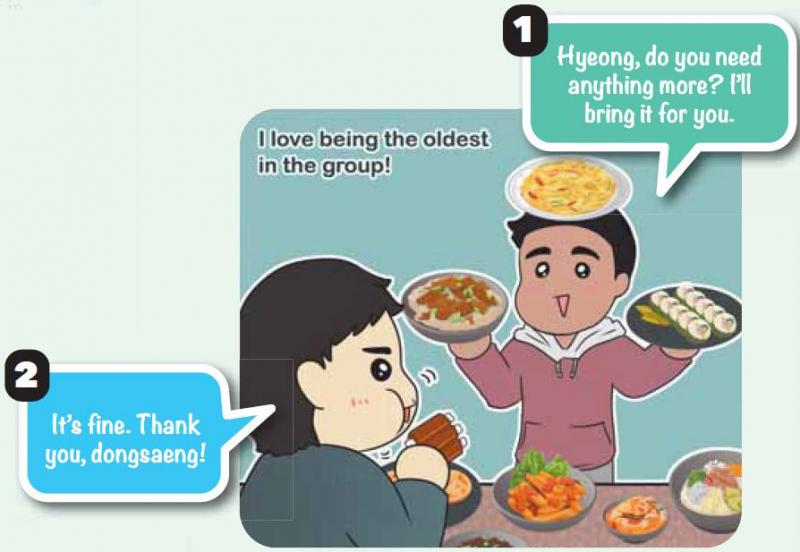 Holiday Greetings
It’s the holiday season and there’s no better way to spread good cheer than wishing someone a Merry Christmas and a Happy New Year. But you’re in Korea, so let’s learn how to say these greetings in Korean. You got this!

Speakin' Korean: Do you have any plans for the weekend?

Speakin' Korean: Do you have any plans for the weekend?