Spray away the summer heat in center of Seoul

Spray away the summer heat in center of Seoul 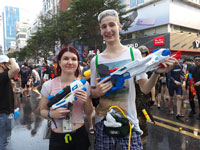 Sinchon is one of Seoul’s university hubs. Flooded with college students from the three major schools in the district, there are many spots to get a cheap meal, inexpensive clothing and enjoy fun activities that won’t hurt your pocket too badly.

Every year, as the summer heats up, the area is also host to the Sinchon Water Gun Festival near Yonsei University. Held the first weekend in July, the event draws many water gun-clad students and tourists ready to attack each other in a friendly battle as DJs set the soundtrack. After a fierce battle, warriors celebrate their victories in restaurants and coffee shops that sit along the Sinchon-ro.

Though this year’s festival was held on July 6 and July 7, you should definitely check it out next year. (Note: I always try to write about things you can enjoy in the near future, but I really wanted to check this fest out, so let’s call this a really early plug for next year’s event.)

I exited Sinchon Station’s Exit 3 and walked straight into the center of the battlefield. I found it easily as all the vendors in the underground shopping area were selling water guns. 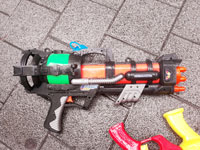 The method of participation is simple: If someone shoots you with a water gun around Sinchon-ro, shoot back. Don’t forget, this festival is the only place where you can legally “shoot” each other, be it your friend or a stranger.

There is no entrance fee for this festival, but if you want to look like a serious water gunfighter, take a look at the festival defense package for 11,900 won (or $10.09), which includes goggles, towels, waterproof bag and the use of the locker and changing rooms. 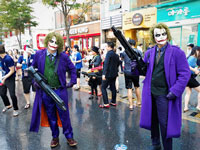 Some people brought backpack sprayers, while others simply brought a bucket. You can bring anything that can be filled with water, so choose your weapon wisely! Or you don’t need to bring or buy any water guns and raincoat if, like me, you’d rather be a peaceful observer.

Tons of locals and tourists joined in and battled each other with their colorful water guns. They chased and sprayed each other without anger. It was pure joy! I even spotted some participants in Marvel and Joker costumes.

“There’s a lot of people and they’re having fun. I’ve met a bunch of people I don’t know,” said Chelsea from the United States. “It’s pretty cool. It’s better than going to the concert because you can’t be wet at another concert.”

On the first day of the two-day festival, the 0.24 miles-long main street that rolls down from the gate of Sinchon Station to the front gate of Yonsei University was jam-packed with people of all ages and nationalities, armed with a raincoat and water gun. According to the organizers, the festival attracted more than 100,000 participants this year.

It’s been two weeks and I still feel pumped from the sights and sounds of the fest. Though this year’s festival is over, it is only one example of the fun things Sinchon has year-round you won’t want to miss. And, you definitely won’t want to miss next year’s Water Gun Festival. 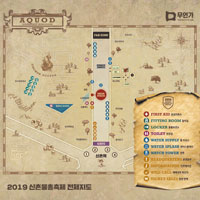 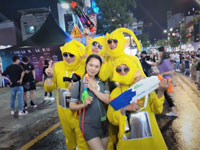 Korea’s Largest St. Patrick’s Day event to be held on March 16 in Seoul