Enoshima Island, near the old samurai capital of Kamakura, is a must-see for tourists visiting the area.

The small island of about 3 miles in circumference is home to a modern yacht harbor and beautiful beach and sea, offering various marine sports opportunities. The scenic and historical location attracts tourists year-round.

The island served as the venue for sailing competitions during the 1964 Tokyo Olympic Games, and again will be the site for the competitions of the 2020 Olympics. During our visit in early June, preparations were underway, which included a beach clean-up event and construction of structures for the Games. 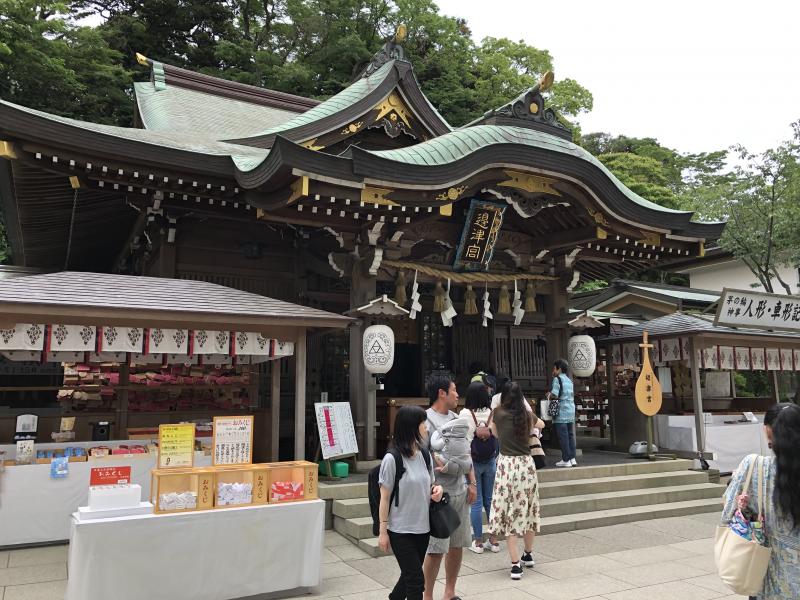 Beyond being a popular beach destination, Enoshima’s island has been considered a holy place and a power spot since ancient times. Enoshima Shrine is believed to bring visitors happiness and fortune, along with progress in arts and studies. Interestingly, the shrine itself is made up of three separate shrines, one each for three sister goddesses, Hetsu-no-miya, Nakatsu-miya and Okutsu-no-miya. To visit the three shrines, pilgrims must visit the entire island as they are scattered throughout.

The island is accessible via two bridges, one for vehicles and the other for pedestrians. Having our van parked at a lot near the bridge, we started our exploration by going to Benzaiten Nakamisedori, a busy shopping street. Filled with inns, a spa, souvenir shops, restaurants and ice cream parlors, the street also has some establishments with several hundred years of history. Among them, Iwamatsuya Hotel is especially famous, as it was established as a lodge for pilgrims over 700 years ago.

While strolling along the street, we dropped by a food stall and sampled a skewered rice balls wrapped with sliced pork rib, nikumaki onigiri-gushi, for 500 yen (about $4.80). Tender meat seasoned with a soy-sauce base complimented the sticky steamed rice, and it was very tasty.

A few shops up from the food stall, a signboard for “Dr. Fish,” drew us in for a unique pedicure involving tiny carp (See page 13).
After our five-minute fish pedicure, we walked our soft feet up along the stairway through the bronze torii gate and into the traditional Shinto shrine where Hetsu-no-miya, the third sister goddess of Enoshima Shrine, is hallowed.

Here, we found a small waterfall feeding into a pond lined with a few small baskets on the edge. It is believed that placing your money under the waterfall will cleanse it and multiply your fortune. We couldn’t resist but to take our coins out and cleanse them. We also dropped some into the “basket of fortune” in the pond for luck.

After the customary bowing and offering at the main shrine, we made our tough, 190-foot ascent to the top of the island. Normally, it might take more than 20 minutes to hike up, but we took the “Escar,” a set of escalators that will take you up in about four minutes. We each purchased a ticket for 360 yen (about $3.20) for a single trip to the top of island. Yes, we would have to walk down.

The path on the island top had a quiet and a kind of mysterious feel, much different from the busy shopping street below.

While strolling on the island top, we came across some street cats along the path. The island is famous for its many cats, and their lovable gestures have repeatedly made them Instagram stars. On our visit, we actually spotted nine and stopped to greet and photograph the furry island dwellers.

The narrow, but well-paved path led us to “Yama Futatsu, or two mountains in Japanese, a valley which is situated between two highlands with an observatory deck perfect for gazing at the endless blue ocean and sharp-edged cliffs. Along the walk, we found old buildings housing souvenir shops, tea shops and restaurants, giving the impression we had gone back in time. 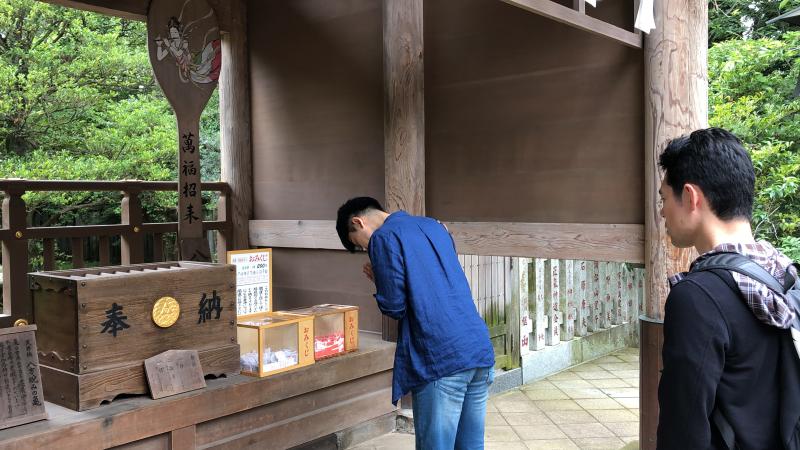 Eventually, we reached the shrine for the first sister goddess, “Okutsu-no-miya.” Again, we offered our prayers in the traditional way, wishing for happiness, good fortune and health.

For lunch, we headed to a popular seafood restaurant, Uomitei, at the furthest reaches of the island. We tried an Enoshima classic, Shirasu-don, a signature of this island eatery. (See page 14) The lunch of seafood was fantastic, and the panoramic vista of Mount Fuji, along with Izu and Hakone mountains over the blue Sagami Bay, was breathtaking.

On our descent back down to the shopping street, we could see the yacht harbor, bridges and beach from the mainland.

The two-hour stroll showed us several different faces of the island – busy shopping street for tourists, panoramic vista of the Sagami Bay from the island top, lovable street cats, traditional houses and the quiet and solemn approaches to the shrines. And that made me feel that the island is an attraction for virtually anyone - old and young, locals and tourists, can enjoy what Enoshima Island has to offer.

Visiting and worshipping these goddesses is believed to offer visitors happiness, fortune and progress in arts and studies.

Pleasant streets and trails for an autumn stroll in Seoul