Often called “Cat Island,” Enoshima has been known for its many four-legged street inhabitants.

Tourists visit the island for its many attractions, but there some who are also curious about the cats that cruise the streets. 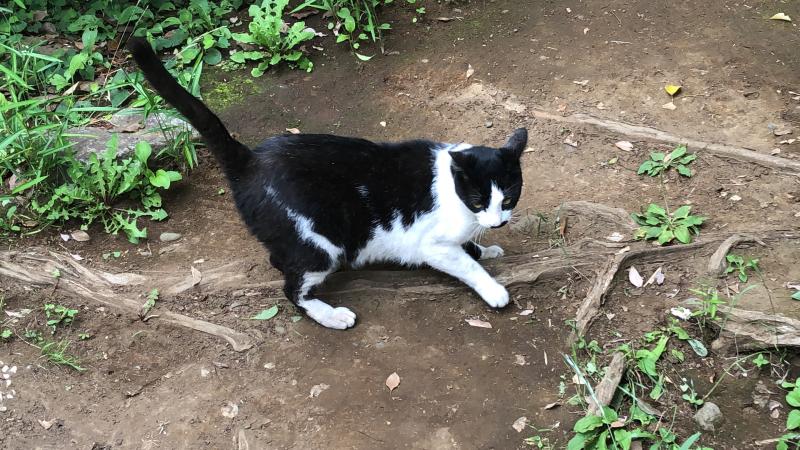 Enoshima was considered an easy spot to abandon cats in the 1980s, since the green-shrouded island is isolated from the mainland, and not far from the urban center. The abandoned cats have bred themselves and multiplied on the island.

The cats now enjoy a relaxed island life with care from the residents on Enoshima and the tourists that often feed them.

On our visit we expected to see many cats, but our stroll through busy Benazaiten Street and the shrine grounds was without any feline sightings.

One of the “Escar” escalator employees said there were many street cats, but they preferred the quieter areas up higher on the island, especially around the western park. The employee did not steer us wrong, because as soon as we stepped of Escar at the top, we spotted a few of the island’s felines near Okutsu-no-miya Shrine.

Our cat spotting reached peak numbers near the Yama Futatsu (two mountains) hill where restaurants, tea houses and souvenir shops in traditional-looking wooden buildings lined up along the path.

Despite being street cats, these creatures looked fairly clean, fat and healthy. The cute and lovable cats laying on the street without a care in the world made us smile.

Unlike most street cats, these enjoyed human company. ChiHon, approached a cat and pet it. Being accustomed to people, the cat didn’t run away, but just let him keep petting her.

Other cats we spotted were unmoved by the tourists positioning themselves on the ground for selfies. One cafe even had a plate of cat food out, which we caught one of the ginger-colored cats heartily helping himself to.

On our two-hour tour of Enoshima, we spotted no less than nine cats. Cute, well-fed and very relaxed, they are definitely the embodiment of island life on Enoshima. How many will you spot on your next visit?

Did you know?: Hundreds of species make Korean DMZ home