Differences abound half a world away, yet there is something about these islands, these wild natural playgrounds, that remind me of home. Perhaps this is because I don’t do the beach the same way most people do. I never did. I’m more Jack Sparrow than I am Jimmy Buffett; I’ll take a swashbuckling adventure over a piña colada any day of the week.

When I was five years old my mother took me on my first trip to the beach.

An older boy bet me I couldn’t dig a hole in the sand clean through to China. I didn’t quite make it, but I knew one day I would show that boy.

I was flipping through a guidebook on Malaysia when I told my intrepid travel partner, Megan, that it was high time to see how far across the sand we could make it. She had two questions for me: “How bad are we going to get lost?” and “What’s this going to cost?”

It cost me roughly 70 Malaysian Ringgit. That’s how much I fork over to the kids touting swag between the buses at Bukit Jalil.

“Did you just buy a treasure map?” Megan asks as we board a bus headed north from KL.

“So what if I did?” I counter. “We’re after an adventure.” “Your map is written on the back of a bus schedule,” she counters. “All the best Maps are,” I say. I don’t precisely know this to be true.

“Besides, he gave me a discount on our tickets.” Megan frowns and adjusts her air pillow. “Just don’t get us lost this time.”

Pangkor Island, the forgotten underling of posh Penang, has the power to set free any inner child yearning for adventure. It all starts with the ferry from the mainland; studying my map by what light does stream through the grimy port window I can’t help but feel a little like an 18th century navigator, a commander of the high seas.

The sluggish ship, surely at one time a tin transport, chugs along at a knot or two. The wooden seats are cracked and stained with salt and saturated with shellfish stink. The first mate is churlish at best and chastises me for chasing fairytales. “You bought one of those maps, did you?” he laughs.

Surely he’d attempt to pirate my swag if he knew the truth. Megan asks me why we’re on such a crummy ship when more luxurious options must certainly exist. “Those new speedboats don’t dare make this trip,” I say.

“It’s too dangerous. It takes a rugged, proven vessel to navigate these waters.” Megan frowns and rubs clear a space on the window. A speedboat of a more modern vintage roars past. “It was fully booked,” I plead. We eventually hit the sand of Pasir Bogak under a blood-red setting sun and wonder aloud just how far we can make it out before the last rays of the day are gone and the jellyfish are upon us. Turns out the jellyfish aren’t the problem; the toxic alga that affixes to our skin is. We’re scratching our skin raw as we rush through our hotel lobby.

The girl behind the counter laughs at us. “You didn’t go swimming out there, did you?” she asks, pointing past the cement mixers and scaffolding to what we thought was supposed to be a postcard-perfect beach. “They’re building a new hotel at the north end. People are saying they broke an old sewer line.”

We postpone our adventure in lieu of hot showers and two servings of “opor ayam” served up fresh by an Indonesian expat working the hotel kitchen. He stops me from using our map as a napkin and examines it the way I imagine Magellan would have, given the opportunity.

You must leave before six in the morning if you have any hope of finding this place,” he says, poking the map with his forefinger. “If you do not have bicycles, I can rent them to you.” Megan frowns as I reach for my wallet.

Despite Megan’s scepticism and the excruciating call time I manage to get us on the road early. On our wonky bicycles we navigate the hilly terrain of this small island by the bumpy beam of the flashlight I’m holding between my teeth. We detour here and there to take in what we can of the jungle before we realize our Indo hunger dispatcher wasn’t simply being cheeky. The sun is up and it’s angry this morning.

Thankfully, the map leads us off the tarmac and into the down a dusty 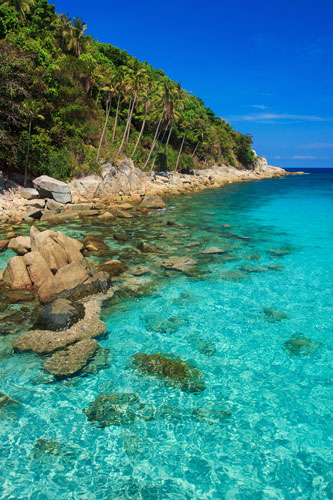 dirt path into the bush. We ride, we push and we crash through the underbrush into a lagoon culled from the pages of Defoe.

By noon I have an epic sandcastle built and I’m working on a serfdom of sand when a passing hermit crab reminds me of a higher purpose. “Sure, it looks exactly like the place,” Megan says, never taking her eyes off the pages of her book. “Why don’t you go find it?” I ask her if my new divining rod looks like it will work. I paid five dollars for it. “You look like a regular doodlebugger,” she says. I smile.

According to the Urban Dictionary this is almost certainly a term of endearment. I am a doodlebugger, a seismic explorer of the highest calibre. My rod spins me in circles through the bush until I come upon a small inlet where my treasure is supposed to be. I grab hold of the nearest vine and swing out over the water. Miscalculating the laws of tensile strength at a critical moment, the vine snaps and I am submerged.

I spend an hour below the surface and come to two conclusions; the first is that the treasure is certainly not located beneath these waves. The second is that tropical fish are impossible to catch barehanded, no matter how quick I think I am.

We return to the hotel dejected. That Indonesian charlatan is feeding his pet hornbill peanut butter and crackers.

I have half a mind to tell him how I really feel about him. Him and his little bird, too. “Let me see that map again,” he says, skilfully dodging my verbal jabs. He examines the map with a raised eyebrow.

“Here is your problem,” he declares. “You have been reading this map upside down. The island you want is on Malaysia’s east coast.”

This makes perfect sense to me. Megan’s not so sure. Our man seals the deal. “I can get you tickets at a very good price.”

The Perhentian Islands, some 20km from Peninsular Malaysia’s east coast, have long been a hub for traders en route to Thailand’s interior and a destination for sun worshipers in the know. On a dangerously overloaded passenger ferry departed from Kuala Besut I’m not thinking of how much tea I can move to Bangkok or how to get in on the ground floor of the palm oil industry; I’m wondering where exactly on this island I can find a cache of buried treasure.

A few hundred meters from the shore I walk the plank. Perhentian Kecil – small stopping point in English – boasts some of the finest and rarest coral left on earth, much of it existing less than two meters below the surface. With ill-fitting goggles and a leaky snorkel I investigate this treasure trove, unsure at times if I’m ever going to be ready to emerge from the cerulean depths.

On this reconnaissance mission I carry an antique camera and a crystal ball I’m convinced will lead me straight to the mother lode. I rub noses with a cadre of long-beaked coral fish, fog up my goggles when I creep too close to a lizardfish and try not to stick my foot into my mouth or the gaping maw of the tridacna maxima, the curiously named small giant clam. I end my expedition after my camera springs a leak. Nobody told me you weren’t supposed to change film underwater. I decide I’m through with local lore. If there’s treasure to be found beneath these consecrated waters I’m going to find it on my own.

Besides, I’ve been warned. “You embarrassed me enough on Pangkor,” Megan says. “There’s no such thing as buried treasure!”

Suddenly I’m a solo act like Henry Jones Jr. The next phase of my hardscrabble search begins with a scramble over the rocks at Tangung Guntung Laut; I imagine real bouldering is done with more finesse.

After two hours spent clambering over sun-blasted stones I make Coral Bay. I expected untrammeled territory. I get another tourist resort. Curiously, the kids hawking $10 Bolex watches on the beach look like the ones that sold me my map. I lay the ragged document on the rock, stare into the sun for a moment too long and deduce that I need to be bearing north if I have any hope of finding this treasure.

needle Megan has curiously tucked into my hat and a leaf I deem worthy of the job.

With my bearings about me I set forth, slipping on lichen in my haste – thong sandals were not built for bouldering – and succeed in dropping the compass and breaking the needle off in my foot. It takes me the rest of the afternoon to crawl back to the resort and ten seconds for Megan to remove the needle from my flesh. She will tell you that I cried until dinner time but her report is fraught with inaccuracies.

We regroup over banana pancakes. Resigned to the fact that there may never have been a treasure Megan convinces me to turn my attention to more important things, like sunsets and long walks on the beach. I relent in my pursuit of wild riches as we soak in the vista of the setting sun and wonder just how many crab boats one horizon can contain. We pop the cork on a bottle of wine. I lay my head on the sand and count the stars in the sky when there’s a tickling on my toes. I assume that this tickling represents a hermit crab exchanging its shell for a new home inside my left foot and I react with the appropriate level of abject horror.

The reality of the situation is no less astonishing; the beam of my flashlight illuminates dozens of newborn sea turtles – of the hawksbill or green variety I cannot honestly say – waddling on tiny paddles towards the sea like an army of zealous skull-capped infantrymen. I consider joining them, for they must have some latent knowledge of the treasure I seek, but think better of it. Theirs is an understanding I can never hope to possess while I’m still not sure which way is north. Not that it matters anymore. I hand Megan the flashlight and start digging a hole in the sand. “What are you doing now?” she asks.

“I’m digging to China,” I reply. I am closer than I’ve ever been, but it doesn’t matter if I get there. Travel, after all, is about experience, not simply escape.

Guided tour takes the mystery out of Hanoi’s street food

Take a look at what's happening on your base!