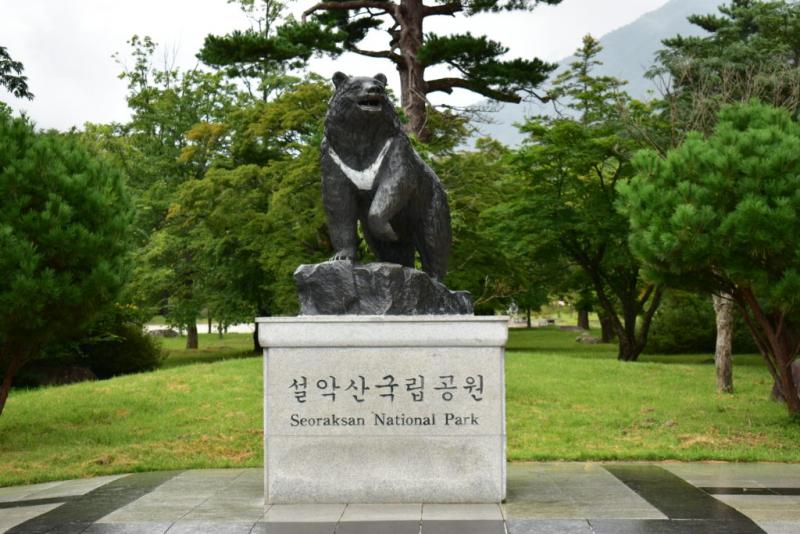 Only one day had passed since the famous CCPT “training” and I had booked an AirBNB in Sokcho, South Korea. needed to get away from Osan for a while. The previous two weeks had been nothing but 12 hour days, COVID contact-tracing scares, and lackluster meals from the BX (insert barf-face emoji here). The abrupt change in pace after ENDEX was called afforded me the opportunity to slow down, recharge, and get back to nature. So, that’s exactly what I did.

I’ll admit that the drive out to Sokcho (the closest town to Seoraksan National Park) was almost as relaxing as actually being in the park. The road was wide open, I had an amazing LoFi playlist coursing through my body, and of course, road snacks lol. I left Osan around 2 p.m. after gassing up and arrived in Seoraksan just in time for the sun to begin setting. 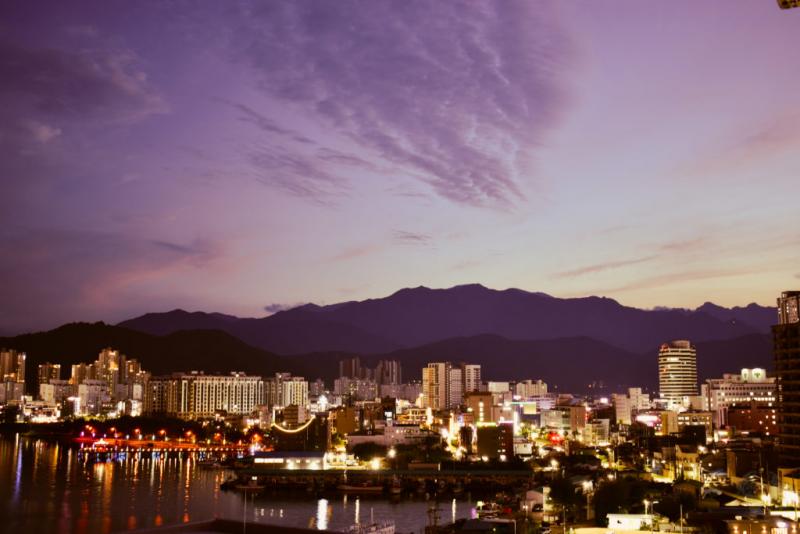 I stayed at an AirBnB overlooking Cheongcho Lake and the views from the balcony were absolutely magnificent. I had the mountains to my west, the ocean to my east, and an amazing little lake/harbor directly outside my balcony. Needless to say, I was very content with my location. I was so close to the ocean that something in my head reminded me of a bucket list item I wrote down years ago: catch a sunrise over the ocean. Being that California was much easier to reach than Florida, I had only ever seen sunsets over the ocean, never a sunrise. So, itching to scratch something off my bucket list, I set my alarm for 5:30am, hit the lights, and anxiously awaited the early wakeup call. 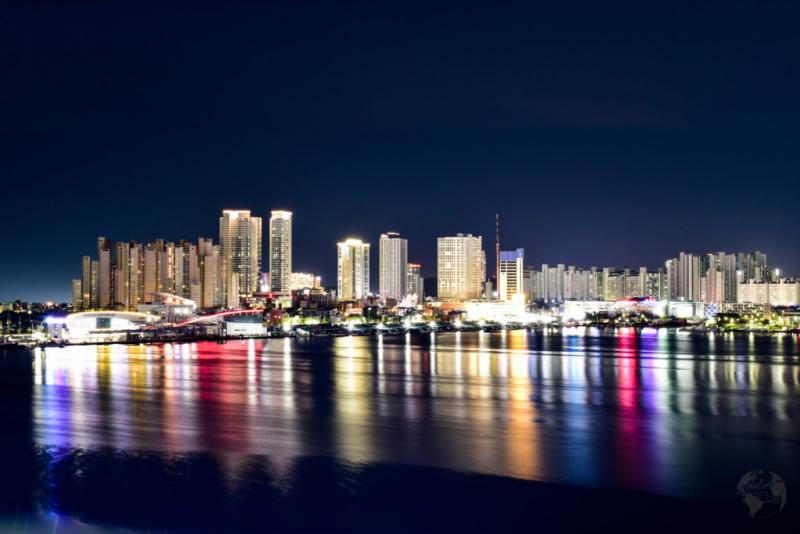 Not only did I catch a sunrise over the ocean, I did it in the company of the few Koreans that actually get up before 6:00am at an amazing temple/gazebo that stretches out towards the east called Yeonggeumjeong. The first day was a bust as there was just too many clouds for the sun to break through but, the second day, I was simply awestruck. Not only was I infatuated with the colors rising up over the East Sea, I also loved how every boat on the horizon was angled towards the same point on the horizon. It was a truly breathtaking sight; see for yourself below! 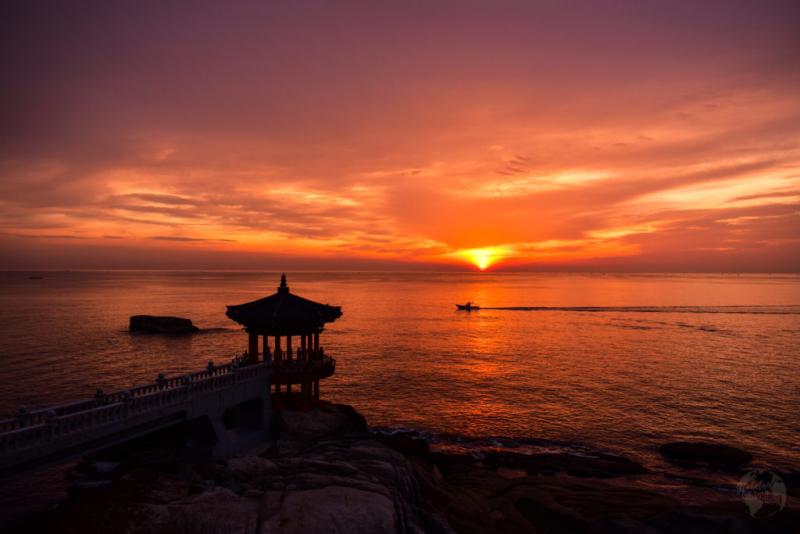 As I mentioned, I didn’t capture a sunrise on the first day so, I pointed my compass west and began making my way towards the entrance of the park for my long-awaited hike. I had been told about Seoraksan National Park from a friend of mine that described it as “being in middle earth” and I was full of anticipation as to what he meant by that. Now, I was about to find out first-hand!

If you know me, you know that I don’t want to just hike any trail the parks I visit. My goal has always been to seek out and hike the hardest and most rewarding ones. Call it arrogance, call it pride, but I believe there’s something to be said about approaching a mountain range or park, pointing at the tallest/hardest to reach areas and saying, “I did that”. To do that in this case, all signs seemed to be pointing towards the tallest mountain in the park, Daechongbong Peak: 5,603 feet above sea level, 10+ kilometers, and over 4,700 feet in elevation gain. I parked the car in a parking lot near a trail that led to the summit and began at 8:15 a.m. 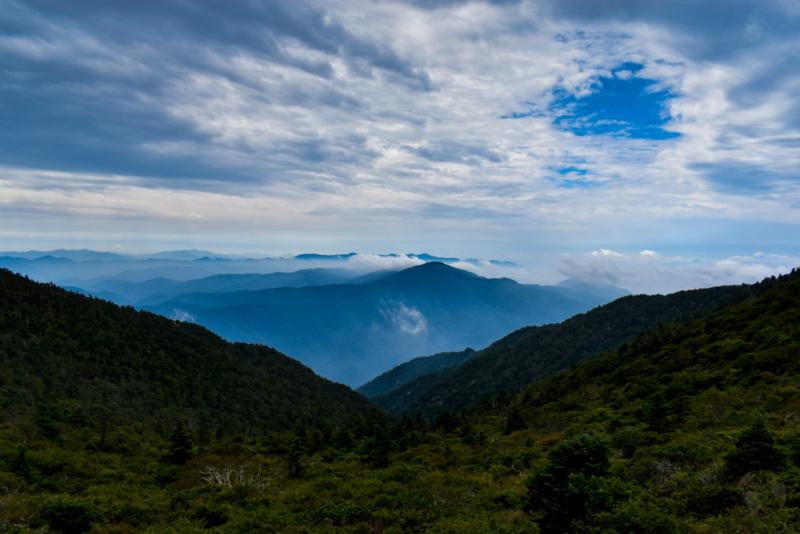 The steep, and I mean very steep, elevation gain right out of the gate is literally breathtaking. I’d suppose that this is the mountain’s way of gut checking you as you decide to attempt a summit. Nature must always, always be respected, and I believe that goes for the mountains we climb as well. Had someone showed up unprepared, either physically or mentally, this initial thousand meters was Daechongbong’s way of turning them away. I pressed on.

Around 2.5km in, the trail I was on joined up with an amazing river gushing hundreds of gallons of water over massive boulders that had been exposed over thousands of years of erosion. The white-noise sound that was cast from each drop of water splashing onto the rocks hinted to me that it was time to rest and zone-out for a while. I grabbed a stinger bar from my pack, found a spot to sit, and did just that lol. If you read my last post, you know that I have a fond relationship with nature because I believe nature is always calling us back out of love. In this case, she was reminding me to rest so that I could continue on to see more of her. 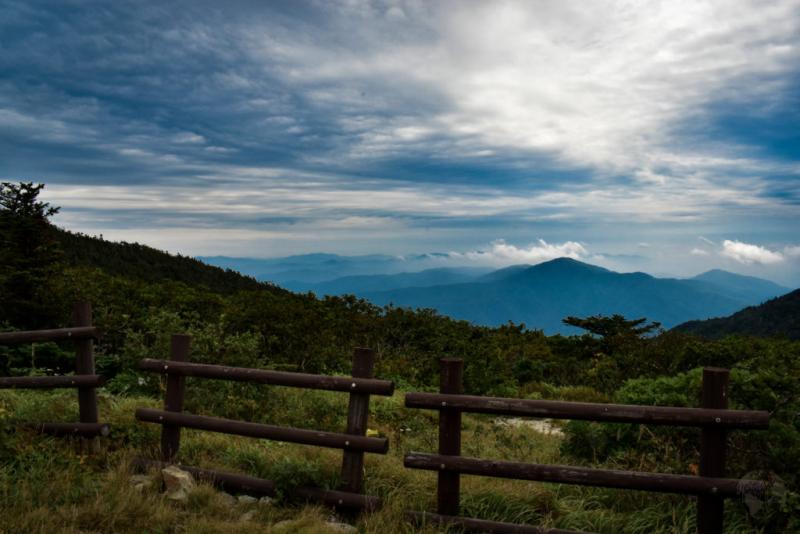 While munching on my stinger bar and zoning out, I noticed a rather nice pool of water that wasn’t too disturbed by the rush of the river… almost like a little oasis for taking a dip should it get too hot. I filed that away in my brain in case I was in need of cooling off on the way down (spoiler alert: I totally polar plunged into it lol). I zipped up my pack, took a sip of water, and pressed on. 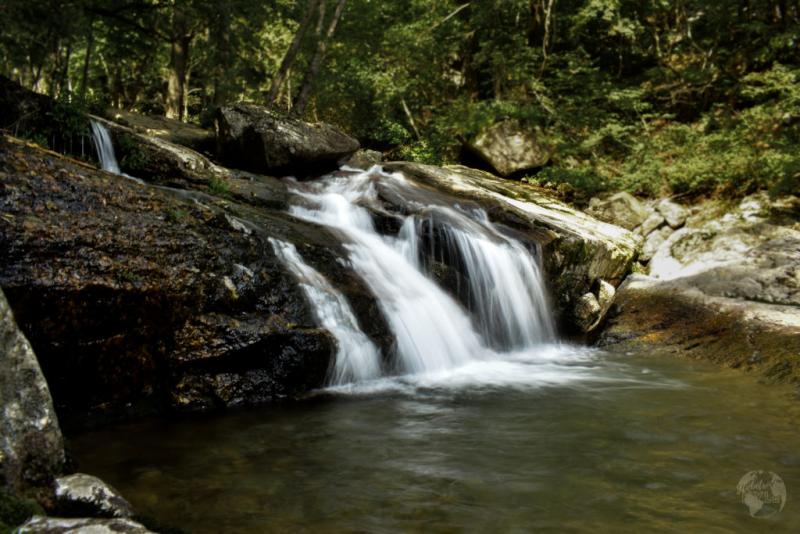 Up and up and up I climbed, reaching false summit after false summit, desperately ready to see this “middle earth” my friend had described to me. A few more breaks, and a few more stinger bars, but still no summit when finally, a sign on the trail read, “Daechongbong Peak: 0.5km”. My heart raced to pump a little more adrenaline into my weary legs so that I could continue without cramping as I picked up the pace. The closer I got, it appeared that wildflowers started to explode around me. White ones, purple and black ones, open ones, closed ones, some that looked like they could be traps for gnats and small flies: I was amazed! Then, before I could continue admiring them, I had reached an elevation of 5,603 feet: I had made it! 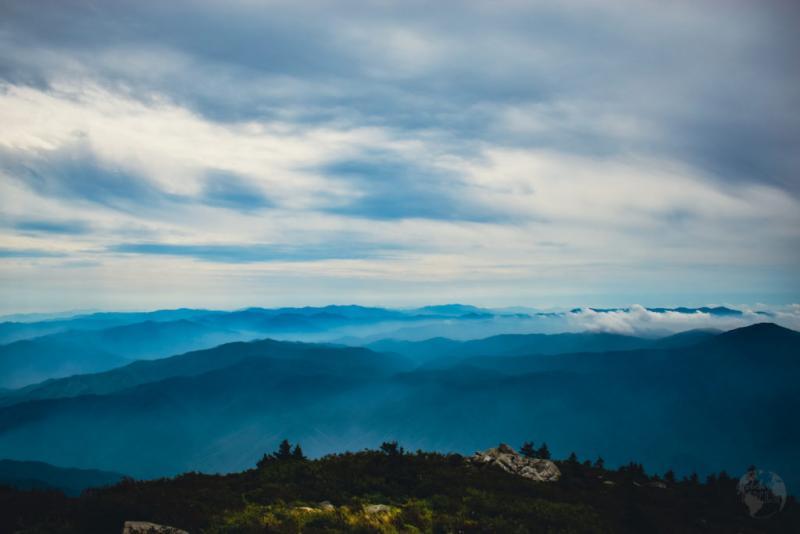 My friend wasn’t lying: this place felt like I was standing at the edge of middle earth! The tall, jagged peaks to the north stretched upwards to the sky as they formed a valley that felt as though hell itself was just below me. If I didn’t know any better, I’d say the rocks were actually the spine of some unearthly creature, desperately clawing his way through the earth to get to me. To the south, I could see mountain top after mountain top of the Soeraksan mountains as they orchestrated a uniformed retreat from the sea. The mist gathered at the base of every mountain which gave rise to a series of ranges, cascading in fashion as each one had a taller one behind it. And lastly, I could see all the way down to Sokcho, the little town I was staying in, juxtaposed to the mighty East Sea. 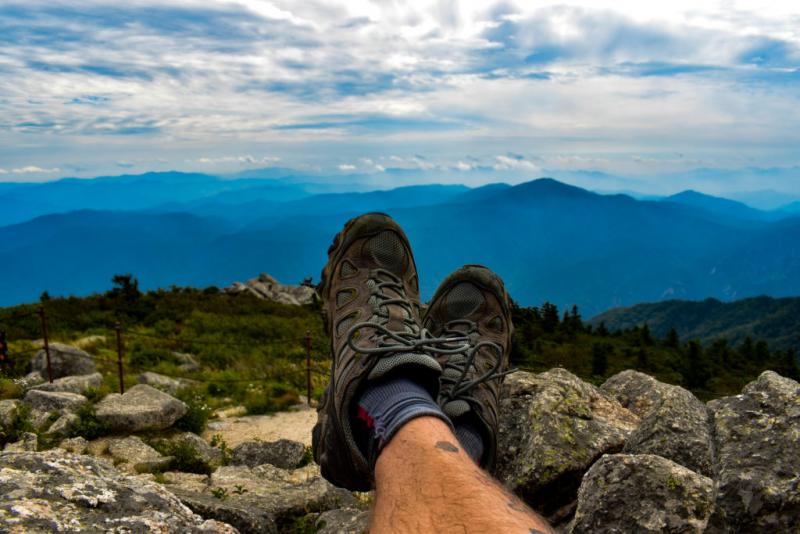 After bathing in the sights and the amazing feeling of returning to a mile-high (you know, because I’m from Colorado and all?) I began to return from where I came. 3km into my return journey, the trail once again linked up with the amazing river…and the amazing oasis that seemed to be audibly calling out to me. I wasn’t too hot, but it just looked so refreshing that I HAD to take a dip in.

“Strip and Dip!” I yelled into my GoPro as I waded into the icy water. For not having been glacier snowmelt, this water sure could’ve fooled me. I placed one foot in, then another, and instantly my hair stood up on the back of my neck. Further and further I inched into the river, water rising up my leg with every step. Finally, I talked myself into it and took the plunge: cold was an understatement! I laid back, ducked my head under, paused for a second, then popped up ferociously as I shook off the excess water like a dog coming out of a lake.

I had never felt more alive. 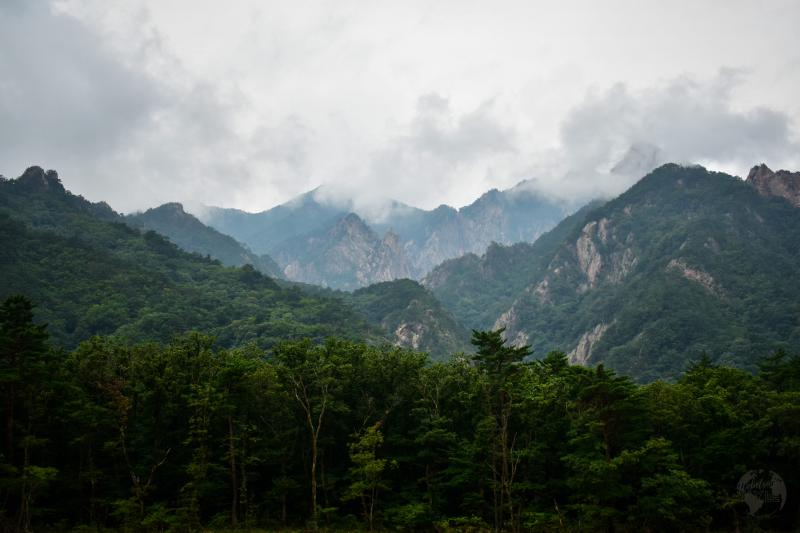