A wide range of noodle dishes are available in Korea, including japchae glass noodles, jajang myeon black bean noodles and dangmun sweet potato noodles, but none have won the hearts of Koreans like ramyeon.

Originally from China, ramen, or ramyeon in Korean, was brought to Japan over 100 years ago during the Meiji era (1868-1912). It consists of Chinese-style wheat noodles in a flavored broth with the addition of various toppings. Though seemingly simple, Japanese ramen combines the flavors from a large number of ingredients with the soup, which may take more than a day to prepare, to create a harmonious whole.

The dish seems to have passed Korea by somehow until the early 1960s, when it took center stage not as a handmade creation whose taste depends on the chef who prepared it, but in the form of mass-produced instant ramyeon (also spelled ramyun), using a manufacturing technique developed in Japan.

Koreans now lead the world in instant ramyeon consumption, eating about 80 packages a year per capita at home and at restaurants, which add toppings for their customers.

Like in Japan, ramyeon’s popularity is due in part to the fact that it is simple to make and quick to eat. It is also inexpensive, making it an ideal lunch, dinner or after-a-night-on-the-town snack for businessmen and budget-conscious students.

This dovetails perfectly with the Korean custom of eating yasik, or a late night snack, according to the Korea Tourism Organization.

While Koreans have not quite developed the fascination that Japanese have for ramen – there is both a ramen museum and instant ramen museum in Yokohama – nor the fanaticism for eating it – it is common for Japanese to line up for more than an hour to get into a famous ramen restaurant – they have made it one of the most widely enjoyed snack foods in the country and it is widely considered to be “the food of the people.”

Upon hearing these words, Koreans can’t help but think of yasik (a late-night meal). Twenty years ago, vendors roamed the residential alleys on winter nights selling fresh chapssaltteok (rice cakes filled with sweet beans) and memilmuk (buckwheat jelly). Whenever vendors passed through a neighborhood, people would trickle out of their houses to chat and enjoy a tasty nighttime snack.

With fast-paced urbanization and the predominance of apartment buildings, this scene is long gone. However, with many office workers staying late at the office and many students studying at private institutes until after dusk, the Korean yasik culture has remained as strong as ever.

The modernization of the yasik culture has resulted in the tendency of many restaurants to offer delivery services—bringing food from kitchen to doorstep with just one simple phone call. There are dozens of yasik menus to choose from, ranging from light meals like porridge or salad to more filling items.

Koreans’ favorite night-time meals have continuously evolved over time. In the past, favorites were memilmuk (buckwheat jelly), chapssaltteok (rice cakes filled with sweet beans), and gungoguma (roasted sweet potatoes). Nowadays, gimbap, sundae, and jokbal have taken their place. Fried chicken, first introduced in Korea in the 1980s, and pizza also top the list of night-time favorites.

One of the best and simplest yasik to cook at home is ramyeon, which is often called “the food of the people” since it is liked by almost every Korean. It takes only a few minutes to cook. Bring 500ml of water to a boil and put in the ramyeon noodles and seasoning. Stir with chopsticks and let it boil for three to five minutes. Let it cool off for a bit and enjoy!

Ramyeon noodles are typically eaten with kimchi, with some people even saying that “if you don’t have kimchi, you can’t eat ramyeon.”

It can be made with a variety of vegetable toppings like bean sprouts, mushrooms, or spring onions, or with an egg or shrimp for added nutrition.

Thanks to its hot and spicy broth, is said to perfectly suit the taste buds of Koreans.

As simple and tasty as they are inexpensive, these instant meals are readily available in convenience stores or supermarkets.

For those of you who need some help to cook the perfect bowl of ramyeon, there is an iPhone, iPad, iPod app for you.

Called “Noodle Timer” and made by RoCode Inc., this free app will make sure you never undercook or overcook your noodles again by letting you know when to take your ramyeon off the boil.

Look for it in the iTunes Store.

Even Kim Jong Un likes it

Over 600,000 boxes of ramyeon were reportedly sent to North Korea in 2004 as part of a South Korean aid relief program, though sources say that most of it was sold on the black market instead of being distributed as food aid.

North Korea apparently started to produce its own version of ramyeon in 2000, and a joint venture with Hong Kong-based companies was also formed.

Ramyeon is said to be popular among members of the North Korean elite who live in Pyongyang and Nampo.

The North’s version seems to have a much milder and brothier flavor, in contrast to hot and spicy South Korean ramyeon.

Ramen blogs
To learn more about ramen, take a look at some of the many English-language blogs about the dish, including RamenAdventures.com, Ramenate.com and RamenTokyo.com. GoRamen.com is also popular, as is ramen-otaku.blogspot.com, Rameniac.com and RamenRamenRamen.net.

Ramen in the movies
“Tampopo (Dandelion),”a 1985 comedy dubbed the first “Japanese noodle Western,” examines the relationship between people and food through a series of vignettes revolving around the story of a widow who goes on a quest to learn how to create the perfect bowl of ramen in order to reopen a noodle restaurant. Among the stars is Ken Watanabe, now known in the U.S. for his roles in “The Last Samurai,” “Inception,” “Batman Begins” and “Letters from Iwo Jima.” Scenes from the film, subtitled in English, can be seen on YouTube.

How to eat ramen
Despite the Japanese penchant for establishing rules to govern every aesthetic experience, there is no “right” way to eat ramen. Some people focus on the noodles first, some on the slices of pork or vegetables, and others on the soup. There does seem to be some agreement, however, that you should not delay too long in eating the noodles because they will get too soft and cool off. The important thing is to just enjoy the food and eat it while it’s hot. For a funny take on how to eat ramen, check out the “Noodle Master Scene” from the movie “Tampopo” on YouTube.

To slurp or not to slurp
In Japan, it is not only polite but it is virtually required to slurp noodles when you eat them. First, it’s a way of bringing air into your mouth to cool off the hot noodles. Second, it enables you to have some soup at the same time, adding some flavor to the blandness of the noodles. Third, it’s hard to eat the long strands with chopsticks without slurping them up in sections (imagine eating spaghetti without twirling it on your fork). This is the case even when eating cold noodles. Irregardless of these reasons, if you ask Japanese people why they slurp their noodles, they will invariably say, “Because they taste better that way.”

Types of ramen
Ramen, which usually comes in a beef-, chicken- or fish-based stock, can be named according to the type of flavoring or toppings used. The most popular flavorings are shoyu (soy sauce-based), miso (soybean paste-based), shio (salt-based) and tonkotsu (pork bone-based). Among toppings, chashu braised pork slices, is the favorite, along with tamago boiled egg, and negi sliced scallion. Other toppings found in many kinds of ramen include nori dried seaweed, kamaboko fish cake, moyashi bean sprouts and corn.

Not cheap enough I guess

SEOUL – Ramyeon is a ubiquitous part of Korean dining culture. It’s an affordable meal for a busy life on the Peninsula. It’s eaten by Korean presidents and beggars alike. It’s shipped all over the world as a delicious and cheap symbol of Korean (and Japanese) manufacturing ingenuity. Ramyeon is food for the masses. Which is why it comes as a surprise to this writer that its four biggest manufactures in Korea have been fixing the price on Korea’s sacred snack  – for eleven years. 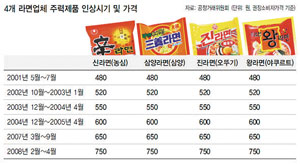 Arirang is reporting that four Korean ramyeon makers have been charged with collusion and fined by the Korean Fair Trade Commission for allegedly scheming together to raise the price of ramyeon by more than 50% over the last decade.

koreaBANG says that beginning in 2001, the companies, directed via email by industry-leader, Nong-Shim, began to steadily increase the price of their ramyeon products, in one week to six month increments as to not raise suspicion from consumers and regulators.

For their mistakenly ‘clever’ plan, at which they got caught, the noodle makers were fined a reported $119.6 million dollars by the Korean Fair Trade Commission.

According to a Korea Times op-ed, the companies have earned over $1.2 billion dollars in revenue since the scam began.

Korean Fair Trade officials have sent a message to chaebols that collusion will result in a small fine, but not much else. If you look at the amount of profit that the companies made from fixing prices and the amount of money that they were actually fined, you can see that crime really does pay if you’re a big company in Korea. If even lowly ramyeon companies have no trouble screwing consumers over, it raises the question: what other Korean chaebols are colluding to bilk consumers out of their hard-earned cash?

At Pyongyang Restaurant, it's not about the food