Though Sunchang may be the birthplace of the South Korean favorite gochujang red pepper paste and is a foodie haven, this region has much to offer for those with other tastes.

Here, gourmands flock to try Korean table d’hote with 12-course meals, and cyclists visit to pedal along the beautiful Seomjingang River, which is the fourth longest on the peninsula. Hikers, too, have a place to go in Sunchang.

Yonggwolsan Mountain stands at 646 meters high and features a “sky road” for those feeling adventurous. The sky road is a wide wooden plank path with safety rails and offers stunning views of the Seomjingang River and surrounding area with a touch of adrenaline for thrill-seekers.

To get to the sky road, head to Yonggwolsan Mountain, a rocky, bizarre spot in the Noryeongsan Mountain Range. Here, the rock formations make Yonggwolsan an interesting sight, almost as if to live up to its name “Mountain of Dragons” in Korean. Avoid weekends and arrive early as there is only one lane on the road to the mountain’s entrance. From the parking lot, head up the gentle trail near the public restrooms which connects to a set of stone stairs.

At the end of the stone stairs, the giant exposed rocks of the mountain leaking to the start of the plank path took my breath away. Along the way, stop for breaks at the observation points for some pics and the great views. As I walked through the sky road, I felt totally safe because there was a guardrail and it was wide enough for two adults to pass at the same time.

At the end of the walk, hikers can either return back the way they came, or like me, can continue up to the mountain summit. The trail is pretty steep heading up beyond the plank path and involves some vertical ascents, descents and even steep rocky sections you can’t dare climb without pulling a rope that is on the trail. I slowed down and took pleasure at the beautiful view again from time to time. I forgot to bring gloves, so it was a bit uncomfortable to pull rope on the slippery and steep rock. Nevertheless, I finally reached the top. It took me about two hours to climb to the summit from the parking lot.

The setting sun created a layered mountain landscape visible in the blue distance. I wanted to stay longer, but because dusk was near, I decided to head back. Originally, I was trying to head down a different trail, but I caught up with a local who said he climbs every day because he works on the mountain and pointed out that the trail was very steep and not very scenic. Running out of daylight, I took his advice and returned down the same path I took up.

If you are short on time, or a novice hiker like me, you don’t need to push yourself to reach the mountain top. I believe that taking in the whole beauty of the mountain and surrounding areas from the observation deck was enough without getting to the top, but it was a really gratifying experience for me.

During my visit, I missed Yogang Rock (요강바위), a point of interest near Janggunmok. This rock weighs 15 tons and created a pothole big enough for three to four adults to fit inside.

The area between Janggunmok and Guamjeong Pavilion is filled with many different rock formations including Yogang Rock. It’s within walking distance and only a few minutes’ drive from the Yonggwolsan parking lot. I promised myself I’d return next year to see the rocks and ride my bike through the Seomjingang Bike Path.

Whether you’re a foodie, a cyclist, a hiker, or all of these, there’s no denying that Sunchang has something for everyone. Check it out! 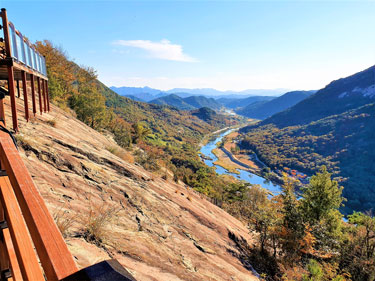 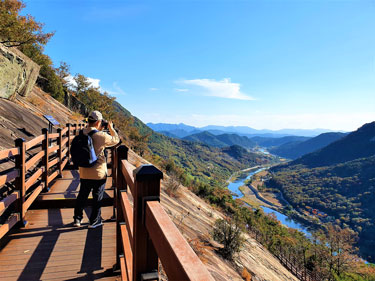 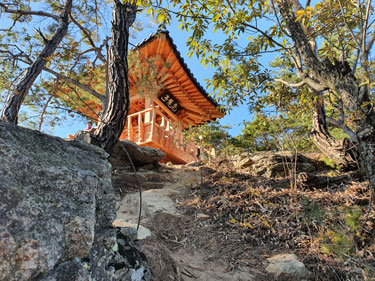 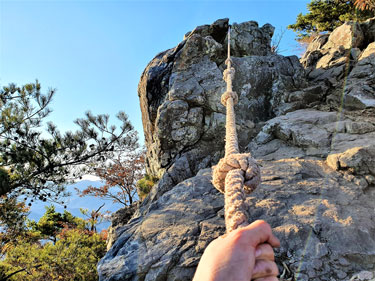 VIDEO| Walk on the edge at Yonggwolsan Mountain in Korea

Take a stroll on the paths through Daewonsa Valley Road

VIDEO| Walk on the edge at Yonggwolsan Mountain in Korea