Two hanok lodgings to be built at the House of Choi Champan in Hadong, Korea

Two hanok lodgings to be built at the House of Choi Champan in Hadong, Korea

Hadong-gun was selected by the Ministry of Culture, Sports and Tourism for the creation of 2022 regional-specific eco-friendly accommodation facilities after securing 3.9 billion won from the national budget.

By the second half of next year, two new hanok lodging buildings and the remodeling of Cheongsongjae, a regionally specialized eco-friendly hanok hotel, will be built in the area of ​​the House of Choi Champan in Pyeongsa-ri, Akyang-myeon, Hadong, the setting of Park Kyung-ri’s novel Land.

Hadong-gun won the bid to build over four cities and counties were selected as a result, a total of 7.9 billion won, including 3.9 billion won from the government and 4 billion won from local funds, will be invested in the regional-specific lodging facility creation project.

The 12 existing 433m2 land set sites will be remodeled and used as shared offices, retail shops, and art galleries that can be used by hotel guests, general travelers, and local residents.

The military plans to open an architectural design contest with the selection of a project promotion committee in the first half of this year for the smooth implementation of the project. 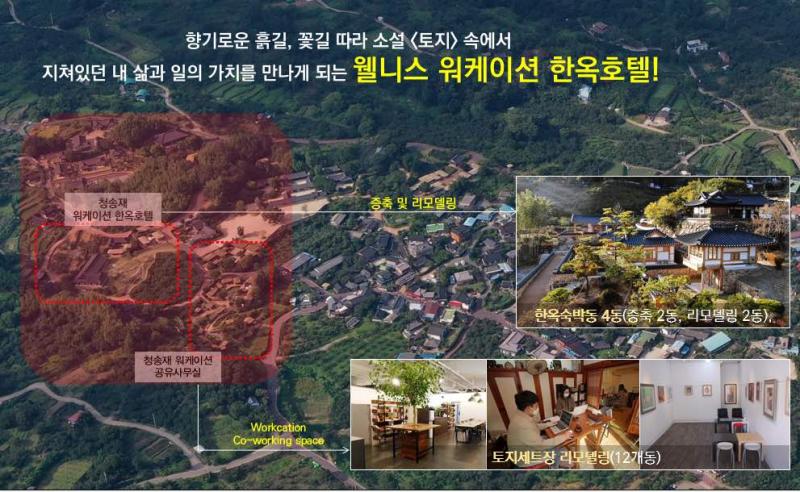 When this project is completed by the end of next year, it is expected to be reborn as a regional-specialized hanok hotel along with the existing Choi Champan Hanok Culture Center, becoming a representative tourism base in the region linked with surrounding tourism resources and a literary theme experience park representing Korea.

“We will do our best to maximize the distinctiveness and identity of Hadong-gun,” said Mayor Yoon Sang-gi.

Choi Champan Hanok Cultural Center was selected as the best case of national local tourism individual projects in 2020 and the traditional hanok branding project in 2021 by the Ministry of Culture, Tourism and Sports.

Since 2020, the Hanok Cultural Center has been commissioned by the FnC division of Kolon Industries, Inc., and the customer satisfaction is also very high, with a one-year reservation rate reaching 98% by providing high-quality services.

2,556m Geumosan Cable Car to open in Hadong in March

2,556m Geumosan Cable Car to open in Hadong in March