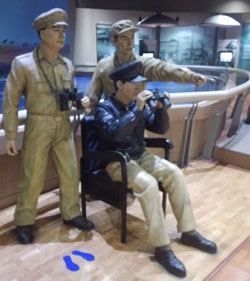 It was a terrible spot. One in which the fortunes of warfare and skill would be needed for it to be successful. On September 15, 1950, the UN effort to eject the military forces of the communist north from the south was still not going well. Fighting continued around the “Pusan Perimeter” as the late summer heat continued. Something bold would be needed to break the stalemate in favor of the UN and ROK forces.

General Douglas MacArthur began drawing plans for a counter-stroke, a landing of troops to break apart the attack of the north and put them on their heels. Three general areas were considered: Gunsan, Pyeongtaek, and the furthest north of the three ports: Incheon. While it was the best available, and closest to Seoul, it was also a logistical nightmare. Tides vary up to 36 feet in twelve hours. Those landing would be stranded until the tides rolled back in. The US Navy said it couldn’t be done. Yet it was the place that was backed.

The historical significance of Incheon is also substantial. 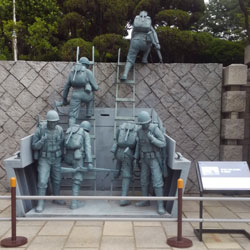 It is the largest port on the west coast of Korea and its in close proximity to Seoul. It has also been the entrepot for the Chinese into Korea. The port was part of the influx of Chinese citizens into Korea in the late 1800s. So, in a variety of ways, Incheon was a critical part of the access to Seoul and the heart of Korea in many regards.

Today, Incheon is still a bustling city, and the delineation between it and Seoul to the northeast is all but un-noticed except in municipal maps. As one goes over the bay via a bridge, the mud flats at low tide are clearly visible. But on that day in 1950, the landings were in doubt. The city still marks those key landing sites with a variety of markers and monuments. While the city has grown and has been reclaimed from the sea, the markers still remain, and offer testimony of the landings by the first Marine Division on that day.

If one is going to Incheon, two of the markers are relatively easy to access. On the 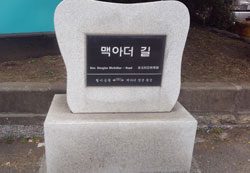 number 1 line of the Seoul subway system, one can simply take the Incheon branch to the end of the line. Once at the terminus of Incheon, a short monorail line to Wolmi-do offers the first landing site: Green Beach. This marker combined with a second photographic marker, is now at the end of the pier, next to a former casement for the defense. It was here at 5:30 a.m. on the 15th that the first men of the 5th Regiment scaled the walls, and soon after took the observatory atop Wolmi island. From here they had to hold the area for the next twelve hours before reinforcements came ashore.

As one goes back towards the train station, the second marker is noted: Red Beach. This marker sits on MacArthur road, and is also next to the marker which notes the success of the ROK Commandos who also came ashore to secure the landing areas. Photos on the monuments offer a visual history of the events. Perhaps one of the most iconic images of that day is the photo of Lt. Baldomero Lopez as he scaled the sea wall at this very beach. 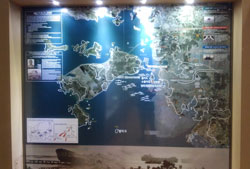 Of the three locations, the marker for Blue Beach was the most obscure to find. Due to extensive reclamation of the area, the marker is on an express road nowhere near the coast.  While the sea wall is still visible, the lower area is now a rice paddy, with an industrial park next to it.

The city of Incheon has also preserved the landings through several other means.  One is the statue of Gen. MacArthur which sits atop the hill in Chinatown. This was the site of Observatory Hill, one of the objectives of the 5th Marines that day.

Further to the south of the Blue Beach marker, is the Incheon landing museum.

As with many of the museums, this too is free, and it is extensive for its size. Outside of the building are several static displays and reliefs of the landing, with two notable full size dioramas which commemorate the Lopez photo, and the Marines seizing the observatory. Inside the museum, there are panels in English and Korean which tell of the units involved, from the Marines, to the ROK Marines as well as the Seventh Infantry Division which landed a day later. There is a model which depicts the landing beaches, a full size statue of MacArthur watching the landings (again from the photo), as well as an overlay map which shows the original beaches, and the current coast. 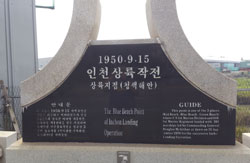 Finally, in the city of Incheon there is also one remaining marker of note: that of the Colombian contribution to the Korean conflict. One can easily miss the contribution of the 16 UN countries which contributed forces to the war effort. This marker, as with so many is one that tries to do justice to the efforts of those who fought for the Republic of Koreas defense.

As for the landing, it was a gamble which paid off. Within three days, Gimpo airfield was seized by the American and ROK forces. By the end of the month, the capital of Seoul was liberated. While this was by no means the end of the war, it was the bold move which MacArthur envisioned. It also solidified the role of the USMC in this conflict.

Dr. Cord Scott is a professor of History and government for the University of Maryland in Asia. He teaches on the US military bases and resides in Osan.

Buckwheat field near Humphreys a great photo op in Korea!