VIDEO: A day of hiking in Gyeryongsan National Park, Korea

VIDEO: A day of hiking in Gyeryongsan National Park, Korea

If the majority of posts on my page didn’t already give it away, I’m a Colorado boy. I’ve been to the top of the state’s highest points, I’ve rafted down the mighty Arkansas River through the Royal Gorge, I’ve been to some of the best breweries in the state, and yes, half of my closet is either Marmot or Patagonia flavored (don’t @ me). What I enjoyed most about Colorado though, were the beautiful, picturesque landscapes that God himself spent a little extra time crafting–some on the sides of the road, some in the National Parks. South Korea, and Gyeryongsan National Park in particular, are some of those places.

A few weeks ago, I finally signed a lease for an apartment to squat in for my year-long stay in Korea. To the average person, renting an apartment might just mean no longer having to worry about where you’ll sleep at night or where you’ll cook your dinner. For me on the other hand, this meant that now, I had a home base to plan adventures from–a launch pad.

Not having any of my household goods delivered and the weekend fast approaching, I did what every responsible adult does after moving into a new place: I said, “screw toilet paper and groceries, let’s go explore!”…and that’s how I landed in Gyeryongsan National Park lol.

Saturday morning rolled around and after waking up, I devoured some blueberry pancakes, and hit the road by 9:00am. I hadn’t really planned out the trip the Gyeryongsan, other than I knew I wanted to do some sort of hiking and maybe eat some local food. What transpired over the next 8 hours was what sold me on wanting to visit every National Park in Korea before I die.

As I exited the freeway and paid my toll of about 4,000 won, the road twisted and turned through the valleys of Korea, eventually landing me at the main street near the base of the Park. Both sides of the street had flocks of people headed in every which way as vendors beckoned to them to buy their goods or at the very least, sample them. What I hadn’t realized was that this was Korea’s vacation season, and everyone had the same idea: get outside and go to the National Park.

Slightly deterred by the massive crowds, I ducked into a small coffee shop to grab an espresso and reevaluate if I really wanted to persist with my hiking plans given the hundreds of people I’d be sharing the trails with. I sat, eating a Korean pastry and sipping espresso in one of the 15 valleys of the park. As I looked out a nearby window, I made eye contact with an exposed rock face hundreds of feet above the valley floor and I could audibly hear the mountain beckoning me to at the very least, sample what it was offering, just as those street vendors did to the massive crowds passing by them.

I waved to the barista and headed towards the entrance of the park.

After paying the ~2,000 won entrance fee, I followed the crowds of people headed in the general direction of the park. I had to pause and reflect on why this seemed so foreign to me. Within the States, National Parks visitations usually consist of arriving in a car and driving for miles to reach a particular sight before snapping a few photos, reading a few park signs, then continuing back down the road to eat dinner in the nearby town. However, Gyeryongsan almost felt like an amusement park with how we were all headed in the same direction at the same time. The more I reflected on it though, the more I loved it! Everyone there that day, whether they knew it or not, was a hiker–these were my people!

Once through the entrance, the crowds started to disperse a little and I was ingulfed in lush, evergreen vegetation. Turns out, I was walking through the Green Forest of Donghak Valley. The soothing sounds of a babbling brook and the calls of birds filled the air in this 3.5km stretch of forest that ultimately led to Gwaneumbong Pass. As I peered ahead, I could make out an Iljumun (or one pillar gate), so I knew a temple had to be close by. Sure enough, I was right!

Like a columbine bursting through a rock in the Rocky Mountains, Donghaksa Temple stood unparalleled to its surroundings, overflowing with color. Every column and eve of every building on the temple grounds vied for attention as the yellows and blues laced in the woodwork contrasted against the foggy backdrop of the evergreen forest.

I learned that this temple is a Buddhism institute for Buddhist nuns and enshrined below it are some of the most recognized, loyal artifacts in ancient Korean history. I wandered the grounds, amazed at the architecture juxtaposed to the manicured lawns and flowerbeds and when I finally pulled my head out of the clouds, I noticed fewer and fewer people around me. Then, above me, the thunder rolled…uh oh lol.

Being naïve, I figured “eh, a little rain never hurt”, so I continued down the trail towards a sign pointing towards Gwaneumbong Peak. The peak was only 2.1km away and I figured that if it decided to rain, I could quickly turn around and get back to the trailhead since I was only about 2km away. Well, about 20 minutes into my hike, I started to think, “huh…it sure is dark for being noon” lol and before I could finish that thought, the skies opened up and Poseidon himself was commanding the oceans to relocate to a position directly above my head–I. was. drenched!

Deciding that to continue on would be a rather dumb idea, I decided to chalk this adventure up to an ‘L’ and that I’d try it again another day so, back down the trail I went. Then, just as quickly as the storm came, it left–the rain turned to sun and the wind calmed to a gentle breeze. Whiplashed by the weather, I decided to give the hiking plan one more shot as I returned to the trailhead. There, I noticed I was one of the few souls left in the park. Score!

What nobody warned me about (or what I failed to listen to if they did) was that hiking in Korea in the summertime was like hiking in a wet sauna: it’s hot, it’s entirely too humid, and you’re constantly sucking down water. Up, up, up I climbed. The intense rain had added some significant humidity and the breeze I was enjoying had all but vanished; I couldn’t believe how hot it was!

The trail towards Gwaneumbong Peak was steep to say the least but, the foliage and scenery along the river was something I’d only rarely experienced in the Rockies and totally worth every step. The intense stairs and steep rock climbs all culminated in a rewarding half-way resting point: Eunseon Falls. I zoned out as I watched a 46m-high cliff pour water into a stream below it on the side of the Gyeryong mountain in the Donghaksa Valley. It was surreal! Turns out, these falls earned their name because of their height and beauty representative of a place where a hidden temple might be found, surrounded by beautiful scenery. 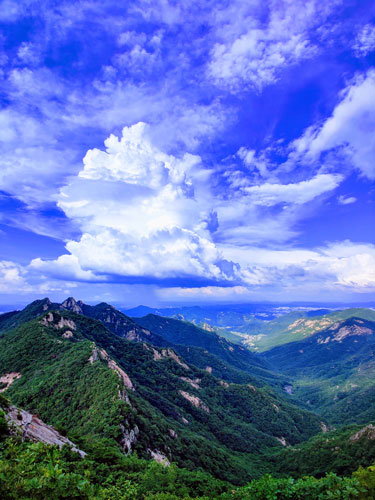 I pressed on, tackling more and more stairs until eventually my quads began to cramp and I desperately wished for a summit in the very near future. Before I knew it, I could see what looked like a rooftop to a gazebo in the distance and I knew I had to be nearing the top of the mountain. With one final push, I found myself 766m above sea level at Gwaneumbong Peak–absolutely breathtaking.

To the south, the skies were cloudless and blue thanks to the storm pushing out all the pollution in the air, allowing me to see for a hundred kilometers. To the east, a massive thunderhead was building in anticipation of unleashing hundreds of gallons of water some nine or ten kilometers away. I sat, enjoying the effects of a cool breeze combing over the mountain as I breathed a breath of accomplishment. The air was crisp, and the sound of silence was all around me. I paused and bathed in the moment. My legs were tired, my body sore, but my soul: at peace. 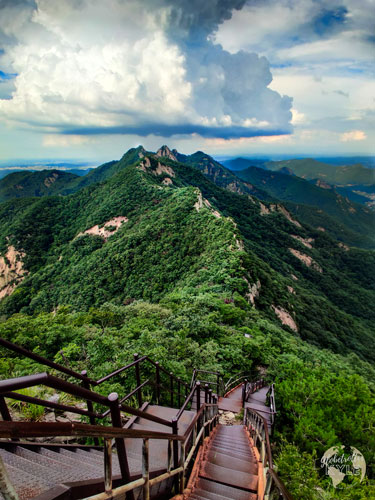 The trail continued in a loop fashion, forcing hikers to summit Sambulbong Peak before returning to the trailhead. I descended down Gwaneumbong Peak and traversed along an amazing ridgeline with breath-taking views at every clearing in the trees. There, I learned that Gyeryongsan National Park translates to “Rooster Dragon” because of its distinct ridge line that looks like a dragon wearing the crown of a rooster. Well, not that anyone will ever ask but, I have officially climbed a dragon wearing the crown of a rooster lol. 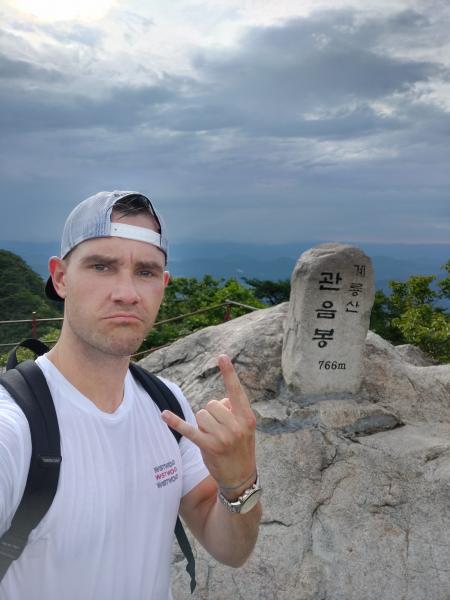 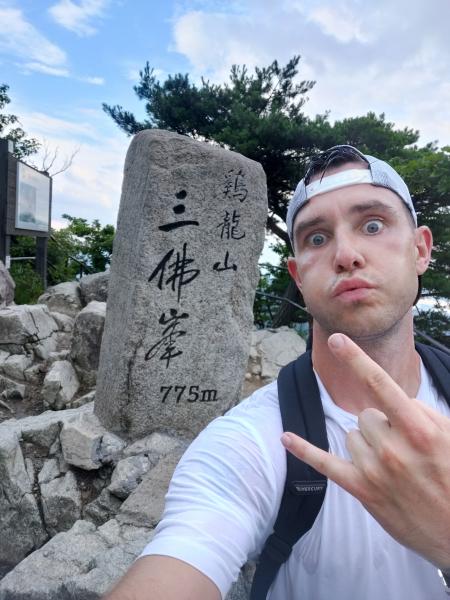 After summiting Sambulbong Peak at 775m, I pressed back down the mountain towards my initial starting point. As I neared the end of the trail, I began to recognize my surroundings because it was where I had turned around earlier in the day thanks to the storm. I hadn’t seen another soul in over 3 hours so, when I came across a small pool of water created by a waterfall near the trail, I promptly removed my shirt and took a deep soak in the cold waters, cooling my body off. Once again, my soul was at peace.