The Hawaii of Korea–that’s how many people explain Jeju Island in South Korea. But given geographic- and climate-based arguments, the two islands are strikingly different! So, if that’s true, then why would anyone want to visit this acclaimed tropical paradise during the winter? Well, read on and I’ll explain why I think it was one of the best decisions I’ve made since being stationed in South Korea.

Jeju Island is located just an hour (by plane) from mainland South Korea and is actually a dormant volcano. Don’t worry though, this volcano hasn’t erupted since 1007, so you’re more than safe to travel here! Given the island’s striking beauty and distance from the congestion of the mainland, Koreans have repeatedly flocked to Jeju to walk along the pristine beaches, hike to the tip-top of Korea (Mt Halla or Hallasan), and of course to witness the acclaimed haenyeo, or mermaid divers. 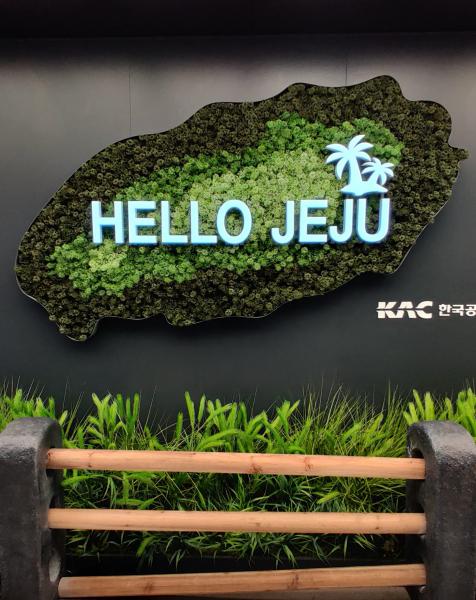 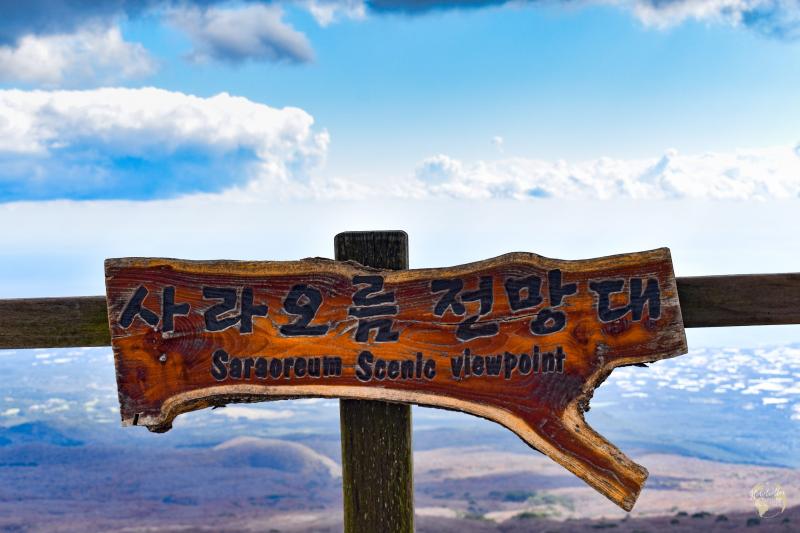 My personal journey to Jeju Island (and what I recommend doing)
So, like I proposed earlier: why would you visit a tropical paradise in the winter time? Short answer: less congestion, and much better weather than mainland South Korea. Additionally, I’m a bit of a health nut, and I’ll do anything to get to a place with better air quality: the sea breeze generated by the Kuroshio current does just that!

I was fortunate enough to visit Jeju during a 4-day weekend in November. My goal was to hike Mt Hallasan on my first full day, then explore other random things on Jeju for the remainder of my visit. I had my flight booked from Cheongju International Airport (only $120!), my hotel booked at Aimi Jeju Beach Hotel (thanks to my Amex points!), and my rental car booked through Tamra rental car. 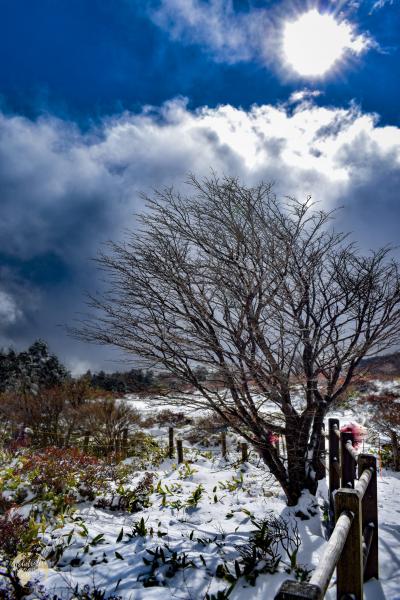 As fate would have it, my plans were drastically changed upon learning that a snowstorm was going to be hitting Mt Hallasan the night of my arrival. Sure enough, the next day, I received a text that my reservation to climb Mt Hallasan was cancelled due to a wicked snow storm slapping the dormant volcano and causing whiteout conditions near the summit.

Nevertheless, I got up early and made my way to the trailhead to see what of this adventure I could salvage. Upon arriving, the park rangers politely informed me that while the summit was closed, I would still be able to hike as far as the Jindalaebat shelter, about 4.5 miles from the trailhead (~9miles roundtrip). I sulked, tightened my laces, and began hiking.

I have to admit: I was pretty discouraged. I just jumped through all those hoops to get out here and the weather, the one thing I couldn’t control, had ruined my chance at scratching this item off my Korean Bucket List. I had to remember, though, that this entire past year had been nothing but jumping through hoops, and I was pretty good at doing that. So, I recalled that old Bruce Lee saying of “moving like water” and pressed on towards the path of least resistance.

The weather shifted dramatically as I traversed along the path towards the Jindalaebat shelter. What was a rather comfortable temperature at the base of the volcano was quickly becoming downright cold! Before long, I encountered my first few patches of snow; I couldn’t have been happier! As a Colorado Native, I looooove the snow, and winter is my favorite season after all. Maybe this snowstorm wasn’t the worst thing?

4.5 miles later I reached the Jindalaebat shelter, and boy was it cold! Snow drifts had piled up along the sides of the building and dozens of other cold souls gathered inside the shelter to eat snacks and defrost their appendages. I pulled out my cliff bars and munched on them while squeezing and releasing my numb hands at least a hundred times before I finally felt comfortable enough to go back outside and retreat back to the trailhead. I snapped a few photos and began making my way back down.

During my retreat from the summit, I took a detour out to Saraoreum Scenic Viewpoint to take some lovely photos of the beach some 5 or 6 kilometers away in the distance. The clouds danced upon an imaginary surface a few hundred kilometers above the surface of the sea and the shadows they left behind created the illusion of dozens of other tiny islands all around the shore. What looked like peace and harmony to the south was drastically challenged by the invasive snowstorm that had just run me (and every other smart person) right off that mountain. Nevertheless, it was surreal! 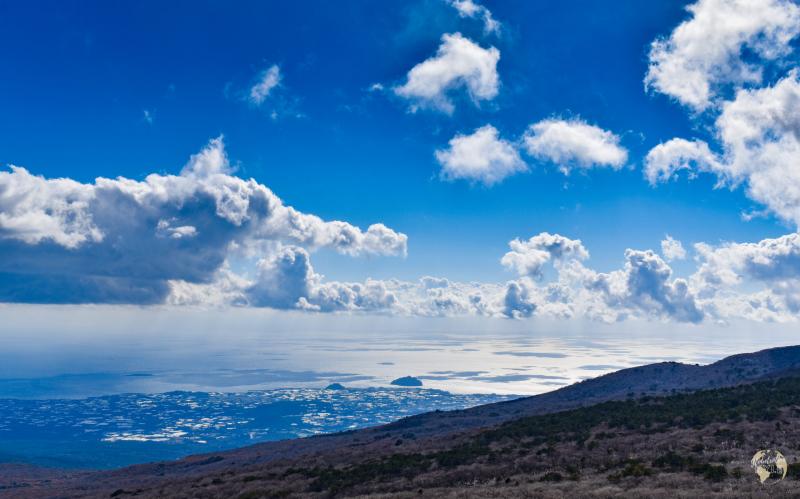 Back at the trailhead, I felt conflicted: I was somewhat content that I hiked as much as I could on Mt Hallasan, but I couldn’t stop reminiscing that “had the weather just been better, I could’ve made it to the top of South Korea”. Classic FOMO, amiright? I tried to shake it off but the feeling lingered; I’d be lying if I said it doesn’t still creep up as I think about this trip while writing about it in January 2023. 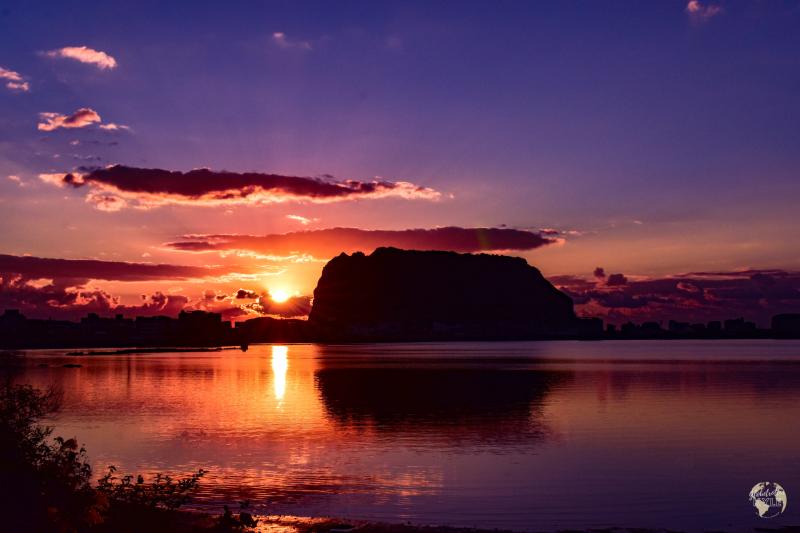 The interesting landscape of Jeju Island is, in it’s own right, something to be appreciated. There are ~360 volcanic cones scattered throughout the island and yet the most impressive of them all is Seongsan Ilchulbong (or Fortress Mountain in Korean, 성산일출봉)

This cone received its name appropriately as the land mass surely does represent a massive castle at first sight. When I approached Seongsan after coming off of Mt Hallasan, I was in awe of how displaced it felt. Rather than a result of volcanic activity, it looked more like a giant meteor had stuck the coast of Jeju some tens of thousands of years ago–nothing around it was even close to as massive! 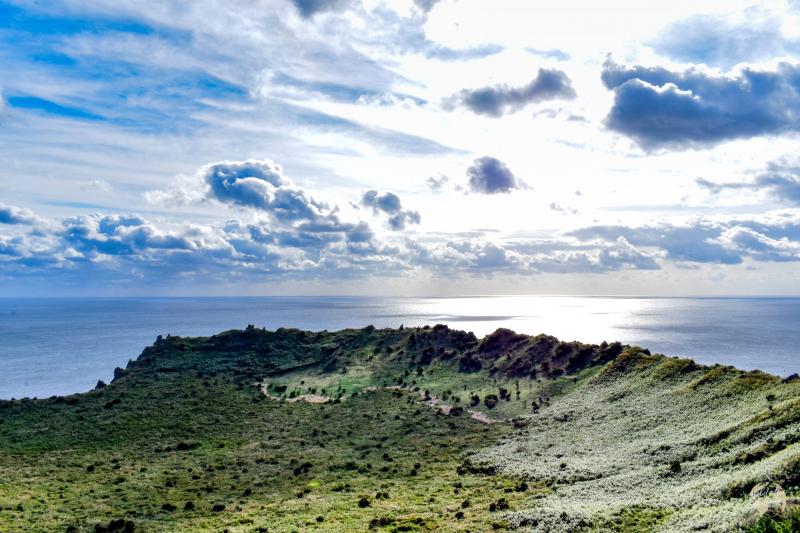 As I got to the parking lot, I paid a small admission fee and began up a steep set of stairs to the summit. Reaching the top, I was even more amazed at the peculiarity of this land mass. The top wasn’t flat like I had anticipated rather, it was a large carter! I felt like I was living in the movie inception where physics was an illusion and creativity ruled formation. 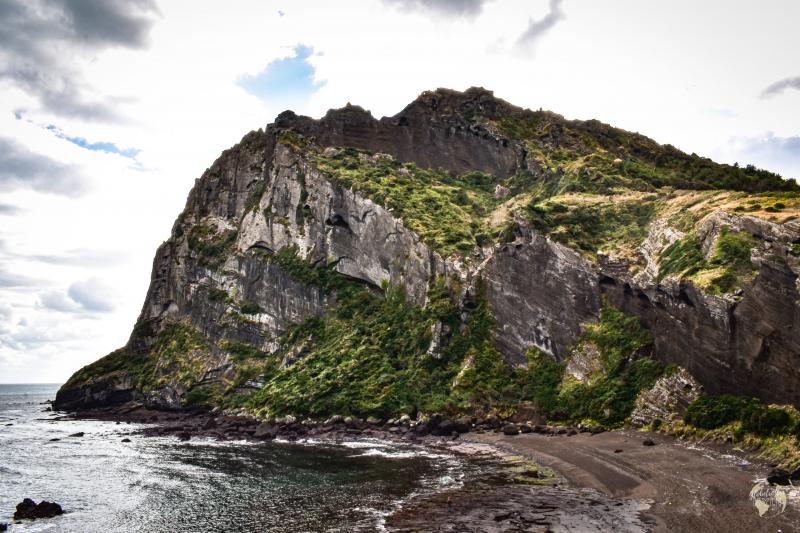 As I climbed back down the stairs from the summit, I made my way down to where Seongsan met the sea. The sheer, jagged cliffs that stretched up almost 200 meters were daunting and fantastic at the same time. The exposed, black stone reminded me of a time I visited Colorado’s Black Canyon of the Gunnison National Park; nostalgia at its finest ladies and gents lol.

Below Seongsan was a beach, and at first glance, it would appear that beach is rather muddy and even swampy. However, because everything on this island is a result of volcanic activity, I was soon walking on black sand. 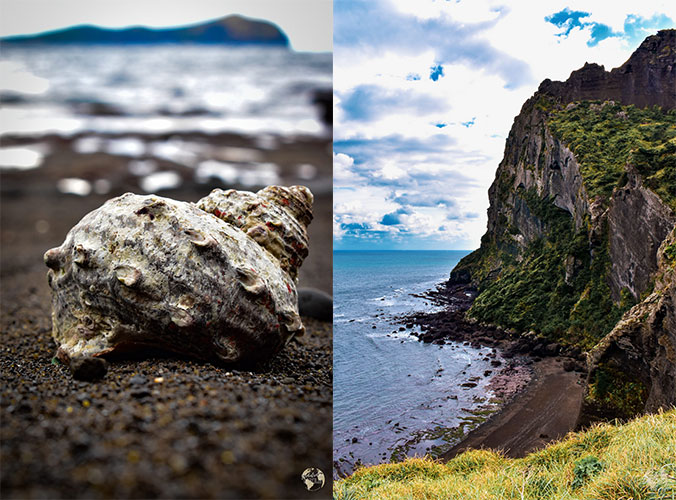 BLACK SAND! I’ve always wanted to see black sand! I nerded out, took entirely too many photos, and let the sand sift through my fingers over a dozen times because, let’s be honest, it’s hot every day you get to touch black, volcanic sand!

If you’re already visiting Seongsan Sunrise Peak, you might as well make it a point to witness the Jeju Women Divers as well–you won’t regret it! Sure, you’ve seen people don scuba gear and go into the ocean on NatGeo, but these women are badass. For 7 hours a day, these ladies dive 10m down into the sea (without any breathing apparatus, mind you) to collect shellfish. You can even eat what they catch right there on the coast after hiking up Seongsan–do it!

On your way down to the black sand beach below Seongsan, look to your left and you can’t miss their headquarters!

4. Admiring some Old Grandads….no, not the drink! 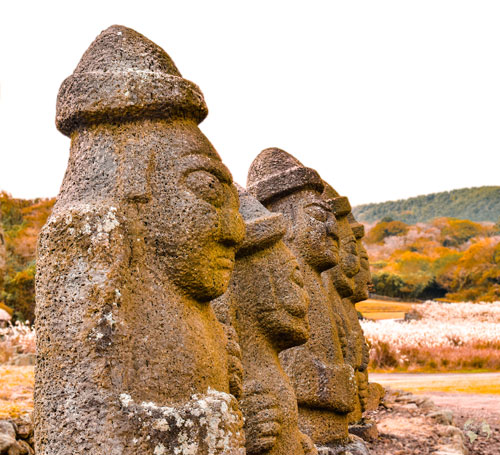 Old Grandfather, Dol Hareubang, same same! Dol Hareubangs are the iconic stone sculptures you’ll see in every gift shop and in front of every business when you go to Jeju. There’s even an entire park dedicated to them! I kept seeing these little statues everywhere I went so, I decided to go to the Jeju Stone Park to see if I could get a better understanding of them (and see more, of course).

While at the Jeju Stone Park, I learned that the Dol Hareubang (also spelt Dolharubang) are deities placed at the sides of entrances to offer protection and prosperity. Additionally, the Jeju Stone Park has hundreds of Bangsataps, or stacked stones that appear to have a humanistic shape, believed to ward off misfortunes. 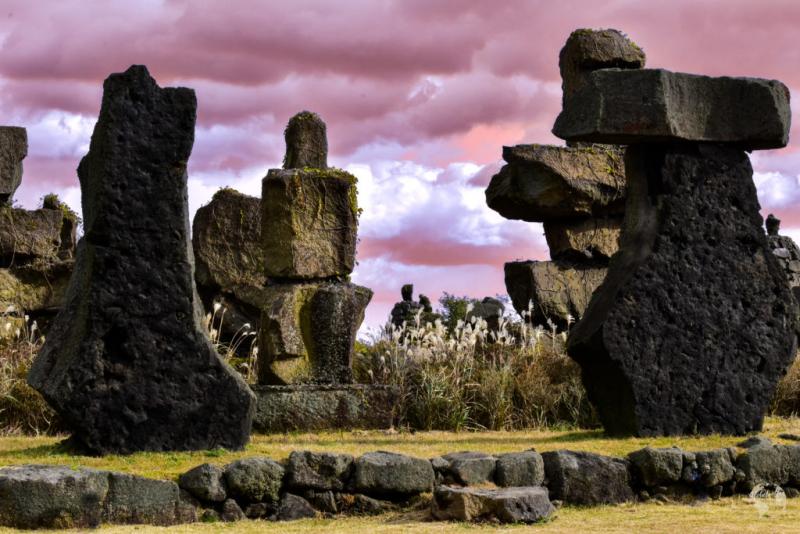 As I meandered the park, I was pleasantly surprised to find there was a large museum on site as well. Being that it was a little chilly, it felt good to step inside the museum for an hour or so to warm up my hands and to learn about the creation of Jeju Island! The museum walks visitors through the geological sequences that led up to the formation of Jeju, and it also showcases some of the amazing rock formations that have been found on the island due to volcanic activity.

5. Waterfalls!
Where else can you see waterfalls that lead directly into the ocean?! You have to visit at least one waterfall while you’re on Jeju, and I recommend the Jeongbang waterfall. I loved visiting this attraction not only because of the amazing photos I got here, but because it’s right near an awesome little downtown area in the town of Seogwipo (2nd largest town on Jeju, opposite end of the island from the capitol city).

The first time I tried to see this waterfall, I got to the parking lot just as they closed the gate to walk down to it; I was super bummed! I had just drove an hour from Jeju city to see it and they closed it on me. But, sticking to my moto of “move like water”, I opted for the path of least resistance and found myself at an amazing little brewery there in the town of Seogwipo. If you ever find yourself near the south end of Jeju, I highly recommend GoBrew. 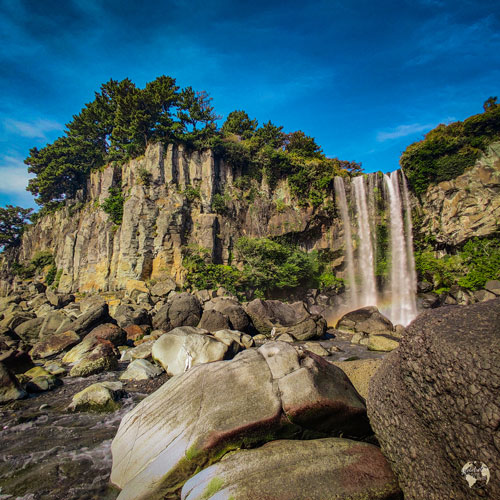 The next day (and my final day on Jeju), I made it a point to go back to the Jeongbang waterfall–I was in love at first sight. Hundreds of gallons of rushing water came plunging down over the rock face and smacked directly into a large boulder field before gently draining directly into the sea. Seagulls and blue herons circled overhead, looking for remnants from tourist snacks.

Remember all those water cycle graphics from your science textbooks in highschool? Yea, they weren’t the sexiest thing to look at but, it was pretty awesome to experience it up close and person lol.

Before I knew it, my journey was up. I drove my rental car back to the airport and was on my way back to mainland Korea.

I will be back to Jeju; I have to. I have a bucket list item that says “Climb to the top of South Korea”, and I intend to cross that off before I leave. There’s also dozens of other waterfalls I’d like to view and most important of all, more breweries!

Exploring Korea: 7 things you must try on the ROK

Light up winter night at Korea's Garden of Morning Calm